Miller started the final round trailing first round leader Levi Moody of Travelers Rest by three shots.  The T.L. Hanna High School golfer got off to a good start in the final round and caught up to the leader.

“I was putting really well both days and I made a few birdies,” said Miller. “I had a couple of bad holes, but I was able to get a birdie after those and get back on track,” said the winner. 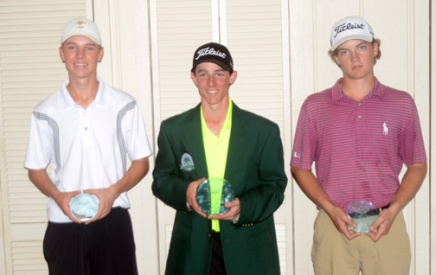 Martin was able to finish one shot in front of Moody and three shots ahead of Colt Martin of Pendleton. Martin had rounds of 71 and 69 for a 140, four under par total for the tournament.

“‘I’ve won a couple of tournaments, but this is by far my biggest win. I’m a senior this year and I want to have a really good year,” he added.

Castle held a solid four shot lead after the first round. The White Knoll High School golfer hot an opening round 74. Katie Whitfield from Clemson shot a 78 while Emily Dunlop of Mauldin had a 79 in the first round.

In the final round Castle carded a pair of bogeys when she had trouble getting out of a pair of sand traps.

“I just had trouble with them today,” she said. “I was lucky it didn’t hurt me, but I need to work on it for the rest of the year,” she said.

Even with the two bogeys Castle shot the best final round posting a 76 for a two day total of 150. Whitfield finished with a 155 total for second place while Dunlop matched Whitfield’s 77 to finish in third place with a score of 156.

Castle and Kathleen Sumner of Bishop England High School in Charleston qualified for the USGA Women’s Four-Ball championship. The tournament will be played in May at the Streamsong Resort in Florida.

“I’m looking forward to playing in the tournament. It should be a lot of fun and it is also six days out of school,” joked Castle.

The boys 11-14 year old champion was Jon Paul Vazquez  who shot a 152 total for the 36 hole tournament. Rafe Reynolds of Greenville was second while Davis Young of Spartanburg finished third.

Complete scoring is available at http://www.cobbsglen.com