It was easier to comprehend the start of the PGA Tour year when TV cameras showed pictures of palm trees in Hawaii rather than stadiums full of football fans.

The Sony Open in Honolulu starts on January 2, but between then and now there are 14 PGA Tour regular season events and the President’s Cup.

Dustin Johnson will not be in the first Tour event of the year. He is recovering from knee surgery (GolfClub file photo)

Nine of the tournaments are in the United States and five are out of the country. The President’s Cup will be played in Melbourne, Australia this year in December.

This week the new PGA Tour season begins with A Military Tribute at the Greenbrier tournament played at The Old White TPC course in West Virginia.

The number one player from the Palmetto State and the third ranked player in the world will not be in the field this week.

Last year Dustin Johnson won a tournament and finished second in both the Masters and the PGA. The former Coastal Carolina golfer has won at least one Tour event every year since 2011.

Since the PGA Tour has gone to a wrap around schedule the 20-time winner has usually started his season in October at the World Golf Championships.

Johnson may have a different time table to begin his season this year. Early in September he underwent arthroscopic surgery to repair cartilage in his left knee.

Johnson had similar surgery on his right knee in 2011 and returned to action in a couple of months.

While Johnson has been a regular PGA Tour player since 2008 several other area players have been on and off the Tour during their careers.

Six new or current PGA Tour players have area ties and will begin their year this week.

Veteran Tour players Bill Haas and Jonathan Byrd return to the Tour for the new season.

Both golfers will use their exemption as previous winners and their total career earnings to secure a spot in the opening event field.

Haas, who grew up in Greenville, has won 6 tournaments including the Fed Ex championship. Byrd has 5 career PGA Tour wins since graduating from Clemson.

Last year both golfers played a limited PGA Tour schedule. Haas recorded 2 top-10s and another top-20 to rank 140th on the money list.

Jonathon Byrd has won five times on the PGA Tour and is in the field this week. (GolfClub file photo)

Byrd had a top-10 finish to go along with 2 top-20 finishes to wrap up the year at number 151 on the earnings list.

D.J. Trahan, who played high school golf at Dorman before helping Clemson win the NCAA championship in 2003, has been absent from full time Tour status for almost 5 years.

Trahan won 2 tournaments early in his career and ranked 164th on the money list last season. He had not been a PGA Tour regular since 2012.

However, Trahan played his way back to the PGA Tour by getting the last spot among the 50 golfers who earned their Tour card from the Korn-Ferry Tour.

Doc Redman won the 2017 US Amateur and left Clemson after his sophomore year to play professionally.  He earned his way on to the Tour by finishing in the top-125 on the Fed/Ex Cup Points list.

The highlight of the former Tiger’s 2019 season was a second place finish at the Rocket Mortgage Classic. Redman shot a 62 just to get into the event and finished at 19-under par. He ended the year with over $1 million in earnings.

USC grad Matt NeSmith finished on the top of the 50 golfers from the Korn Ferry Tour to get a PGA Tour Card. (GolfClub file photo from Gwin Davis)

USC grad Matt NeSmith finished on the top of the Korn-Ferry Tour’s money list with a win at the Albertsons Boise Open.

With the win and his position on top of the 50 golfers who earned PGA Tour cards NeSmith is well up on the PGA Tour exemption list.

Rookies have a difficult time getting into enough events to keep their card, but NeSmith’s status should give him more opportunities in his first year.

Wofford grad Andrew Novak is in the first PGA Tour event of the year as a Monday qualifier. (GolfClub file photo)

Another USC grad graduated to the PGA Tour from the Korn Ferry Tour.

Mark Anderson from Beaufort won the Bogata Championship and finished second at the Knoxville Open to secure his PGA Tour card.

Wofford grad Andrew Novak will also be in the field at the West Virginia tournament and he earned his spot the hard way.

Novak was a Monday qualifier for the tournament. He shot a 4-under par 68 to win one of the four spots in the field up for grabs.

Last year as a full-time member of the Korn Ferry Tour Novak made the cut in 14 events. He had one top-ten finish and 7 top-25 finishes. He ended the year ranked 62nd on the Tour.

Several other players with area connections will play on the PGA Tour this year, but are not in the opening event.

Clemson grad Lucas Glover had his best year on Tour since 2009 when he won the US Open. (GolfClub file photo)

Lucas Glover had his best season on Tour since 2009 when he won the US Open. The Clemson grad finished 29th on the Fed/Ex points list and made it to the Fed/Ex Cup finals in Atlanta.

Another former Tiger Kyle Stanley finished 103rd on the Fed/EX list. His best finish last season was tie for 8th place at the Wells Fargo Championship in Charlotte.

USC AIken product Scott Brown has full status on Tour this year after finishing inside the top 125 at number 112.

Included in Brown’s four top-10 finishes was a fifth place finish at the Zurich Classic of New Orleans.

Two other Tour pros are working their way back from medical conditions that have kept them off the Tour.

Greenwood’s Ben Martin and Spartanburg’s William McGirt are both recovering from injuries and hope to return to the PGA Tour during the upcoming season.

McGirt’s earned his status with his victory at The Memorial and Martin is classified on the Minor Medical Exemption list. 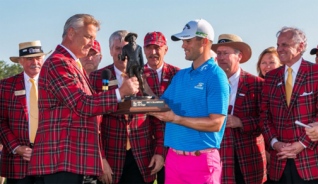 Wesley Bryan is the only native South Carolinian to win the RBC Heritage. Since winning the 2017 Tartan jacket at Harbor Town Bryan has been plagued by injuries.

He has not played in a PGA Tour event since November of 2018.

Many of these golfers are expected to be in the field when the PGA Tour makes its only stop in South Carolina.

This year the RBC Heritage is again scheduled for the week after the Masters with the event at Harbour Town beginning on April 16th.