The early season tournaments have begun and the first rankings are out for the upcoming season of girls high school golf in South Carolina. As is the case in most pre-season rankings the teams that finished on top last year begin the year in the same position. However, […]

USC Upstate golfer Reid Bedell shot a final round 6-under par 66 to win the Upstate Amateur at Green Valley Country Club. The Spartan’s junior topped what may have been the best field ever in the five year history of the tournament. Forty-five college golfers from the area […]

After almost a week of competition at the US Amateur the Phillips brothers were eliminated in the round of 32 at Pebble Beach. Trevor Phillips who was tied for the lead after the first round of stroke play, won his first match, but came up short on Thursday. […]

Phillips brothers advance to round of 32

Trevor and Trent Phillips from Boiling Spring have advanced to the round of 32 at the UAS Amateur championship at Pebble Beach. Trevor Phillips, who shared the first round lead in stroke play, bounced back from a difficult day in the second round of stroke play to post […]

Trevor and Trent Phillips have advanced to match play at the US Amateur championship at Pebble Beach. Trevor Phillips shared the individual stroke play lead after the first round, but fell out of the top spot after shooting a 78 in the second round. His brother Trent Phillips […] 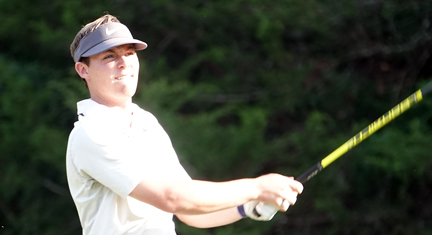 The first round of stroke play at the US Amateur has a familiar name to Carolina golf fans at the top of the leader board. University of Georgia rising junior Trevor Phillips from Boiling Springs has a share of the lead after the first 18 holes. Phillips, playing […]

Dawn Woodard’s name is on a lot of trophies in the Carolinas. The Thornblade Club golfer has won seven WSCGA South Carolina Amateur championships to go along with a handful of CGA titles. Now her name is on a new trophy and it is the first one after […]

Brooks tops Biershenk at The Budweiser

It took three extra holes for Joe Brooks to do something he had never done before. He won a stroke play championship with a playoff win in The Budweiser Classic at Boscobel. On the third playoff hole Brooks dropped a 9-iron shot just two feet from the pin […]

Brandon Masters started the final round of the Beth Daniel Junior Azalea five shots behind the leader and had nine golfers between him and first place. Masters birdied three of his first five holes to catch the leaders and then left them behind as he closed out his […]