The early season tournaments have begun and the first rankings are out for the upcoming season of girls high school golf in South Carolina.

As is the case in most pre-season rankings the teams that finished on top last year begin the year in the same position.

However, there is a twist this year because South Carolina High School League realignment has made a couple of classification more competitive.

The AAAAA classification will have two defending state champions competing for the title this year and one top team that is adjusting to losing some key golfers.

Boiling Springs was the runner-up in AAAAA last year, but the school was denied an exemption to have golfers from Chesnee continue to play on the Bulldog’s team.

The high school league has a rule that allowed schools, in the same district, to combine athletes for teams, if the sport was not offered at one of the schools.

The Bulldogs played under that rule last year, but this year their request to continue allowing Chesnee golfers to play on the Bulldog team was denied by the AAAAA classification board.

The ruling meant that three Chesnee golfers could not play at Boiling Springs so Chesnee began its first girls golf team.

Boiling Springs opened the new season ranked fourth in the AAAAA poll. While the loss of Sydney Roberts, Isabella Britt and Caitlin Cash will be hard to replace The Bulldogs welcome transfer MK Talledo, a SCJGA top-25 player to the squad for this year.

“We are adjusting to the changes and the spirit is good on the team,” said new Boiling Springs golf coach Shannon Turner. “We have an All-State golfer, Amber Amaker, and some new players who have to develop, but it is exciting to see what we can do this year,” she said.

The new group of Bulldog golfers won their first tournament of the year when they toped the field at the pre-season Rebel Invitational played at River Falls Plantation. The team shot a 319 total to top Daniel High School. Byrnes was third with Dorman fourth.

The Bulldogs placed two golfers on the All-Tournament team. Amaker and Madison Dixon both finished in the top-five.

“This was a good start for us and it gets our team excited about what we can do this year,” said the first year Bulldog coach.

Chesnee golfer Sydney Roberts carded on eagle on her first hole and went on to win the Rebel Invitational at River Falls.

The three former Bulldog golfers who attend Chesnee High School have formed the nucleus of the first golf team at the Spartanburg County School. Kyle Scruggs who coached Boiling Springs last year and teaches in the Chesnee portion of the district is the Eagles coach.

Skruggs’ three best golfers are the reason the Eagles are in second place in the AAA-AA-A pre-season poll, just behind the defending champions from Oceanside.

“We have three experienced golfers and three that are new to the game and getting better every day. We  are excited about the opportunity and future at Chesnee,” said Scruggs.

Chesnee freshman Sydney Roberts shot a 4-under par 68 to win medalist honors at the Rebel Invitational. The young golfer got off to a great start with an eagle on her first hole.

The Chesnee team finished fifth in their first outing and Roberts believes it is possible for the team to be successful this year.

“It does not seem very different from last year (at Boiling Springs). We all enjoy playing for the school we go to and the team is working hard to get good,” said the Rebel Invitational winner.

The top ranked team in the AAAA classification Oceanside won the state championship in the division  with only four golfers a fact that is not lost on the new Chesnee team.

With St. James moving up a classification last year’s runner-up in AAAA gets the pre-season top spot in the ranking.

Daniel finished second last year and is expected to once again challenge for a state championship. 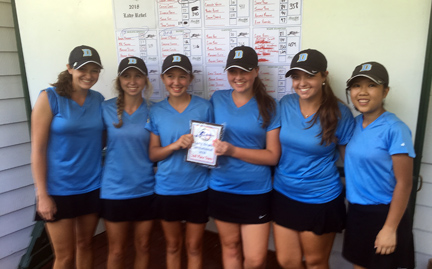 The Daniel Lions won the Mann Invitational and finsshed second at the Rebel Invitational.

“We lost Katie Whitfield to graduation, but we have a good team that won the Mann tournament to start the season” said coach Andy Swords. “It will not hurt our chances that St. James moved up to AAAAA,” he added.

Gillian O’Brien was the top golfer on the Lions team at the Byrnes tournament. She earned  All-Tournament recognition.

Also making the All-Tournament team at the Rebel Invitational was defending Upper State champion Emily Dunlap from Mauldin who finished in second place. Isabella Britt from Chesnee and Dorman’s Abbey Franks rounded out the top five for All-Tournament honors.

The pre-season rankings are interesting, but each division will crown a champion in tournaments played on October 23rd and 24th