Greer Golf is open for play

Both nines have been renovated and open on October 1st. A little over a year ago there were some pretty long odds on the Greer Country Club surviving as a golf course. Now after new turf on the entire golf course, some reshaping of trouble spots and fixing […]

Roberts wins and sets course record at the Ponderosa Classic

Sydney Roberts has been turning in low scores all year, but her win at the Ponderosa Classic was something more than just a win, it was a new record. Roberts set a new record at the course in Leesville by shooting a 10-under par 62, which by the […]

Morgan and Furman set records in win at the Lady Paladin

During a week when Anna Morgan hit more than a handful of amazing shots the Furman golfer saved one last great shot for the crowd watching on the final hole. The Lady Paladin junior came to number 18 with the tournament victory wrapped up, it was just a […]

Lady Paladins line up a win at home

Anna Morgan turned a good round into a great round with a 4-hole stretch on the back nine during the first day of the Lady Paladin Invitational at Furman. Morgan, who was the SoCon Freshman of the Year in the wrap around 2019 and 2020 season, made the […]

It didn’t take long for Wren grad Chloe Holder to put a college win on her freshman resume. The first year player at Augusta State from Anderson shot rounds of 71-67-69 for a 6-under par 207 total to win the Mercedes-Benz Intercollegiate in Knoxville. Holder got her first […] 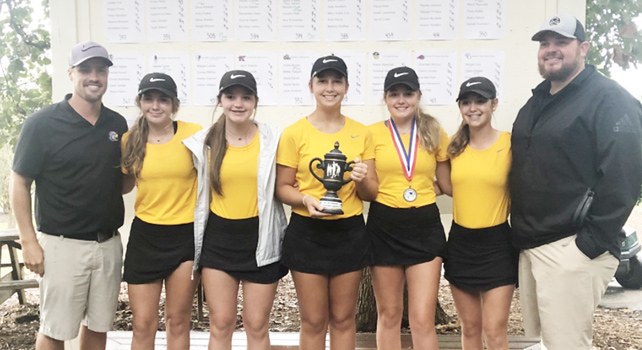 The regular season for girls high school golf in South Carolina is past the half way point and teams are focusing on getting ready for regionals as well as the upper and lower state qualifying tournaments. The Chesnee Eagles have been the runner-up in the last two AAA-AA-A […]

Tigers set records in the deserrt

It is a little hard to believe a college team can shoot 43-under par for a 54 hole tournament and not finish on top. The Clemson Tigers shot a three-day total of 43 under par 797, but Georgia Tech was one shot better. Tech won the shoot-out with […]

Baseballs are usually flying around and out of Flour Field in Greenville, but later this month the horsehide will be replaced by balata. First Tee Upstate is staging a unique fund-raising event. Golfers will get the opportunity to hit golf balls around the playing field. “This is a […]