Rain keeps the Orange Jacket from finishing first round

Some golfers were fortunate to complete their round while others will be up very early on Sunday to finish their first round at the Harvey Brock Orange Jacket Classic. Defending champion Chloe Holder from Williamston is tied with Chesnee’s Isabella Britt for the lead, but only 4 of […]

SC Schools closed for the year, so no HS golf championships as well as other spring sports in South Carolina. SC Schools Superintendent Molly Spearman said fall sports seasons starting when schools are scheduled to reopen In August is possible. Unclear if there can be any organized pre-season […] 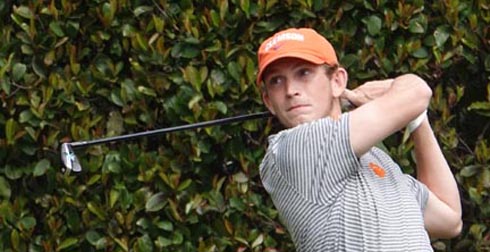 Tigers and Bridgeman sweep up wins in Aiken

Jacob Bridgeman got his first college win and the Clemson Tigers put some new numbers in the record book on their way to a convincing individual and team victory at the Cleveland Golf Palmetto Intercollegiate. The team title was the first of the year for the 20th […]

Meadowbrook stays in the family

Meadowbrook Golf Club has been a family business since it opened in 1963. Now the club will see an ownership change, but the new owners like the old operators will keep the course in the family. Two brothers built and opened Meadowbrook Golf Club almost 60 years ago. […]

Teams don’t win trophies or medals for finishing on top of an Upper State qualifying tournament. Instead they win something more important, the right to advance to the state championship tournament next week. The Daniel Lions will be trying for their second straight South Carolina High School League […]

The Tradition is a unique event on the South Carolina Junior Golf Association schedule. It has been played for the last 24 years at Pebble Creek in Taylors and has an impressive history of winners. The very first Tradition was won by the team of 2009 US Open […]

Rain, rain go away from the SC Amateur

Rain again shares the headline with the golfers at the South Carolina Amateur being played at Thornblade Club. A very busy second day allowed golfers to finish the first round that was suspended because of rain and then begin play in the second round. Nothing changed at the […]

The first round is on the scoreboard at the state high school golf championships. Four locations are hosting the four classification championship tournaments. AAA at Camden Chesnee has a two shot lead over Bishop England after the first round of the AAA tournmaenet at the Camden Country Club. […]

The Lady Paladins added to their first round lead, but the battle for the SoCon women’s championship is still very close. Furman has won the last four team and individual titles. The Lady Paladins hold a 3-shot lead over Chattanooga. The Mocs moved ahead of Mercer into second […]

South Carolina had a few extra playing dates left on their spring schedule because of wash outs at other tournaments and the Gamecocks made the most of the opportunity. USC used the opportunity to tune up for the SEC championship and add another team and individual win to […]