The Clemson Tigers added five new recruits to their golf rosters on the first day of the early National Letter of Intent signing period. Larry Penley and Kelley Hester have added outstanding young talent to join their teams at Clemson. Hester will be able to insert one of her recruits […] 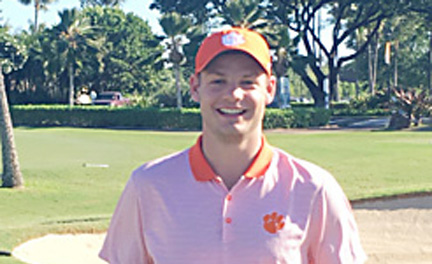 The Doctor is in at Clemson

You might think Doc Redman got the name “Doc” because of his ability to play golf with the precision of a surgeon, but you would be wrong. Doc is his given first name and it just seems to fit perfectly, especially when he is using his clubs to operate […]

Steve Liebler made it look pretty easy on the toughest finishing hole in the Upstate. The Irmo golfer cozied his second shot, a 4-hybrid, up to about 8 feet from the pin on the par-4 452 yard hole. Liebler made the birdie putt to give him and his partner Levi Joyner […]

When Clemson wins this year so does freshman Doc Redman. The team and their star freshman completed an amazing come from behind victory to claim the top spot at the Ka’anapoli Collegiate Classic in Hawaii. The Tigers started the final round of the event trailing Georgia by 12 […]

One of the last events of the Junior golf year was completed this weekend at the Cheraw Fall Challenge. The tournament crowned boys, girls and younger boys champions and also helped a pair of golfers move closer to the 2016 SCJGA Junior Players of the Year Award. Trent […]

The Lexington Wildcats returned to their place on the top of AAAAA girls golf by winning their 11th state championship in the last 13 years. The Wildcats shot a two round total of 645 to win the championship by 38 shots. Before being placed in the new AAAAA […]

Emily Cox has made a practice of winning big tournaments on the final hole with a great putt. The Andrew Jackson High School golfer added the AAA High School championship to her list of final hole victories. Cox eagled the first playoff hole to top Peyton Gillespie of […]

Burgess and Lexington lead AAAAA tourney. The first round of the South Carolina High School girls championships has been completed and Lexington High School is in position to return to their position as the top girls team in AAAAA. Last year the Wildcats missed winning the state title for […]

Greenville takes back the Cyder Cup

Katie Whitfield of Daniel led her teammates to the Upper State AAAA Championship at The Cliffs Valley. Whitfield took top honors after shooting a 2-under par 70. Baylee Evans of Lancaster was second while Beth Ann Townsend of Travelers Rest finished third. The Lions finished ahead of Greenville, […]