It was easier to comprehend the start of the PGA Tour year when TV cameras showed pictures of palm trees in Hawaii rather than stadiums full of football fans. The Sony Open in Honolulu starts on January 2, but between then and now there are 14 PGA Tour […]

Three golfers with area connections have advanced to the second stage of Web.com qualifying. Former Clemson golfers Doc Redman and Phillip Mollica along with recent Alabama grad Jonathan Hardee will move on to the second stage. Mollica, a 2009 Clemson graduate, shot an amazing 20 under par in […]

The Clemson Tigers fell short of making the Match Play round at the NCAA Finals being played at Karsten Creek in Stillwater, Oklahoma. Clemson started the final round in 12th place, six shots from the cut line to advance to match play. The Tigers were never able to […]

Bryson Nimmer shot a 4-under par 68 to take over the lead at the NCAA Finals being played at the Karsten Creek Golf Club in Stillwater, Oklahoma. Nimmer opened the tournament with a record setting 64 and followed it up with a 3 over par 75, but […]

The Clemson Tigers got the leadership expected of a US Amateur champion and can make their plans to head to the NCAA finals at Oklahoma State. The Tigers finished second at the College Station Regional hosted by Texas A&M. Clemson shot a three round total of 846 to […]

Tigers and Gamecocks above the cut line

The Clemson Tigers and the South Carolina Gamecocks are both above the cut line at the NCAA College Station, Texas Regional. The two teams played in the first round on Monday. The top-five teams in the regional advance to the NCAA Finals at Oklahoma State later this month. […]

Interview with Clemson golf coach Larry Penley after the ACC Tournament     Redman and Clemson finish second at the ACC Championship The Clemson Tigers rallied from six strokes down at the start of the final round of the ACC tournament to take the lead at the turn, […]

Tiger’s men and women in second at ACC tourneys

It was a good day for both Clemson golf teams as the men and the women are in second place at their respective ACC championships. The Clemson men are tied for second place going into the final round of the mens championship at the Old North State Club […]

Doc Redman has been away from his Clemson teammates most of the spring portion of the college season. He returned in time for the ACC tournament and helped the Tigers to third place after the first round. After winning the US Amateur, Redman was invited to play in […] 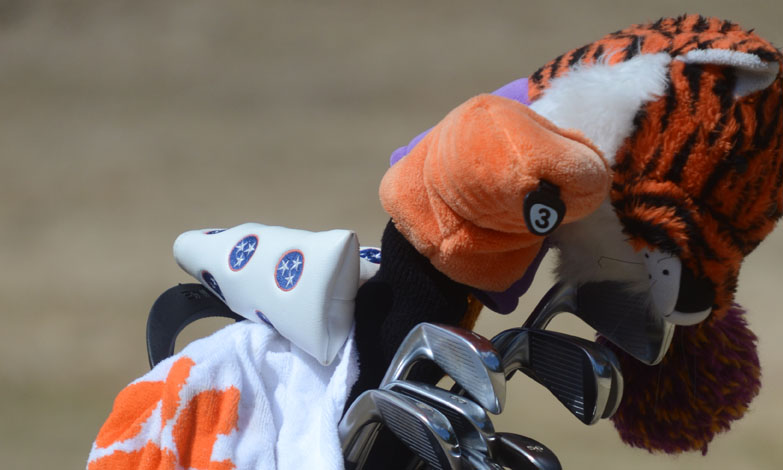 The Clemson Tigers started the final round of the Puerto Rico Classic eight shots behind a pair of top-10 teams. The Tigers trailed 8th ranked Oklahoma and 7th ranked Georgia Tech, but ran down the leaders and held off a challenge from top-ranked Alabama for a one shot […]