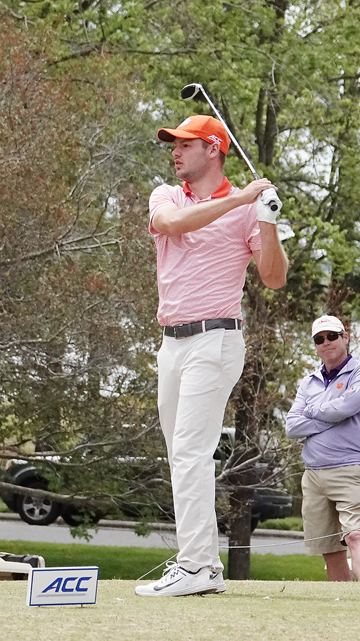 US Amateur champion Doc Redman led Clemson to a second place finish at the College Station Regional to advance to the NCAA finals.

The Clemson Tigers got the leadership expected of a US Amateur champion and can make their plans to head to the NCAA finals at Oklahoma State.

The Tigers finished second at the College Station Regional hosted by Texas A&M. Clemson shot a three round total of 846 to finish 9-shots behind the Aggies.

US Amateur champion Doc Redman came within a shot of winning the Regional title. His 10-under par total was enough for a second place individual finish.

“We did what he had to do today,” said Head Coach Larry Penley, who is taking a team to the NCAA National Tournament for the 28th time in his 35 years at Clemson.  “We cut the lead to four, but could get no closer.  Texas A&M deserved to win,” he said.

The Tigers ended up a comfortable 11 shots in front of the third place team from Baylor.

Doc Redman, the 2017 US Amateur champion, finished in second place, one shot behind the tournament champion Chandler Phillips of Texas A&M.

Redman finished at 10-under par, one shot behind Phillips. Clemson junior Bryson Nimmer earned a top-5 finish with an 8-under par 208 total. Nimmer had the best round on the final day carding a 5-under par 67.

Turk Pettit finished in a tie for 17th place. It was the freshman’s 20th top 20 finish of the year.

“The course played tougher today for just about everyone because the pin placements were in more corners than previous rounds. Nimmer was terrific and so was Doc.,” said Penley.

The Tigers next play at the course they won their NCAA championship at in 2003. Karsten Creek at Oklahoma State is the home course of the top ranked Cowboys. The Tigers will compete in the national championship beginning on May 25th.

“I think we are in a good frame of mind heading to the national tournament.”

South Carolina was within the cut line after the first round, but lost ground in each of the next two rounds. The Gamecocks finished seventh, two spots out of the top five that advance to the national finals.

“Frustrating overall performance for sure. We got off to a pretty rough start, and I really thought the guys really fought their tails off,” said USC coach Bill McDonald.  “I think the guys will look back on this as a real missed opportunity because our games are right there. We just didn’t get it done,” said the coach.

USC Senior captain Keenan Huskey finished his South Carolina career at the Regional. He leaves the program tied for second in career victories and second in all-time scoring average of 71.66.