Tigers and Gamecocks above the cut line 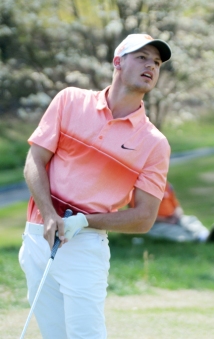 Doc Redman shot a 2-under par 70 to help Clemson to third place after the first round at the College Station Regional. (File Photo)

The Clemson Tigers and the South Carolina Gamecocks are both above the cut line at the NCAA College Station, Texas Regional.

The two teams played in the first round on Monday. The top-five teams in the regional advance to the NCAA Finals at Oklahoma State later this month.

Clemson is in third place behind host Texas A&M and Baylor. The Aggies shot a 9-under par 279 total. Baylor is three shots back at 282 and the Tigers are third at 283 just 4-shots out of the lead.

South Carolina is in fifth place after shooting a 5-over par 293. The first round score puts USC 5-shots behind UCLA for the fourth spot.

Clemson has a 10 shot cushion over the fifth place team while the Gamecocks will have to hold off Ol’Miss, Bradley and Kentucky to advance.

Clemson’s US Amateur champion Doc Redman shot a 2-under par 70 which was matched by Tiger freshman Colby Patton. The two golfers are tied for 7th place just two shots behind the individual leader. 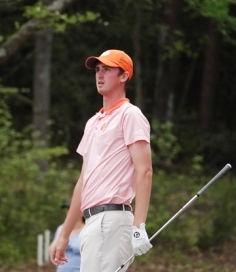 Freshman Colby Patton is tied with Redman for 7th place after the first round. (File Photo)

Brandon Smith and Chandler Phillips from Texas A&M share the first round lead with Cooper Dossey from Baylor at 4-under par 68s.

Bryson Nimmer gives the Tigers a third golfer in the top 15. The Clemson junior shot a 1-under par 71.

The top Gamecock after the first round is Scott Stevens who is tied with Nimmer for 12th place going into the second round on Tuesday.

Live scoring is available at http://www.golfstat.com