Furman senior Natalie Srinivasan won back to back tournament titles with victories at The Glass City Invitational in Toledo and a home course win in the Lady Paladin Invitational. Srinivasan’s first win this year and second win of her college career was accomplished on the legendary Inverness Club […]

Furman senior Natalie Srinivasan claimed her second college victory by finishing on top of the leader board at the Glass City Invitational played at the Inverness Club in Toledo. The 2017 SoCon Freshman of the Year took a one shot lead into the final round. After playing the […]

Interview with Haylee Harford     The Furman Lady Paladins are off to another fine start this year. The 11th ranked team has a fourth place finish on the road and a win at home to begin another push to the post season. Furman finished fourth in the […]

At the beginning of the season Furman coach Jeff Hull thought his team had something special. Even with two freshmen in the starting lineup the first year Lady Paladin coach believed his team could make it to the NCAA Finals and earn a spot in the match play […]

Three teams from the Palmetto State will be in the field for NCAA regional play around the country in early May. The Furman Lady Paladins are ranked 9th nationally and are seeded third in the Lubbock, Texas Regional at Texas Tech. Furman is coming off an impressive win […] 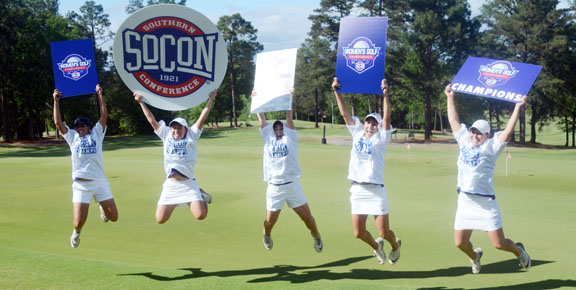 The Lady Paladins scored their second straight second place finish. Furman finished as runner-up to North Carolina after battling the Tarheels for the final two rounds at the Cougar Classic played at Yeamans Hall in Hanahan. Furman led the first two rounds of the tournament hosted by the […]