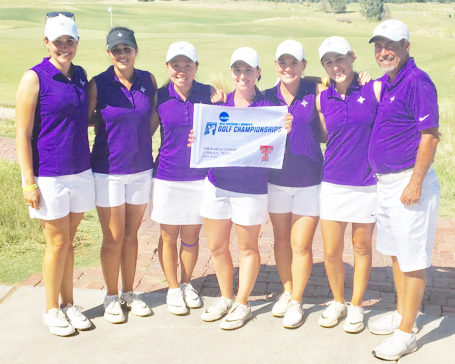 The Lady Paladins extended their season by qualifying for the NCAA Championship with a second place finish in the Lubbock, TX regional. (Furman picture)

At the beginning of the season Furman coach Jeff Hull thought his team had something special.

Even with two freshmen in the starting lineup the first year Lady Paladin coach believed his team could make it to the NCAA Finals and earn a spot in the match play final.

“I knew we would be a very deep and consistent team when the season started,” said Lady Paladin coach Jeff Hull.  “We talked all year about this opportunity so we are just excited about having a chance to “finish” what we set out to do,” he said.

The Lady Paladins moved a step closer to fulfilling their coach’s expectation with a second place finish at the Lubbock NCAA Regional.

“This team never ceases to amaze me,” said Hull. “They really played great the last two rounds and showed just how great they are,” said Hull.

The 10th ranked Furman team finished behind 7th ranked Arizona and in front of the rest of the field to earn a trip to Rich Harvest Farms and the NCAA Finals later this month.

“I am very excited to be heading to Chicago for the national championship, where I feel like we have a great chance to do well,” said Hull.

The Lady Paladins played better each day. Furman opened the tournament with a score of 300. They shaved 17 shots off that total in the second round and three more in the final round.

“Day 3 was probably our best round of the year. Under the circumstances they really “finished” strong,” said the Furman coach.

The 863 total put Furman four-shots in front of Oregon and six shots in front of Texas. The home team from Texas Tech finished fifth and Kent State got the last qualifying ticket to the finals. 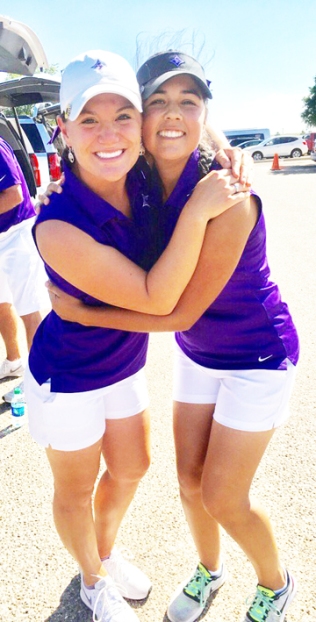 Haylee Harford and Natalie Srinivasan both got close to the individual lead before finishing in a tie for fifth place. (Twitter picture)

Along the way the Lady Paladins all turned in championship performances.

Haylee Harford contended for the lead in the first and second round.

In the third round it was SoCon medalist Natalie Srinivasan, who made five birdies in her first eight holes, got close to the individual lead.

Senior Taylor Totland carded a 2-under par 70 while Alice Chen added an even par round of 72.

Carly Burkhardt, another Lady Paladin freshman, finished off her first NCAA tournament with a 1-under par 71.

Harford and Srinivasan tied for fifth place while Totland and Chen tied for 25th place.

“Haylee has played like this all year so it really was not a surprise.  She solidified her case for All-America Honors with her performance.  Natalie has been showing great improvement all year and when she won the SoCon championship I knew that she was going to be strong the rest of the year.  They both are playing with a lot of confidence,” noted Hull.

The Lady Paladins will be making their second straight trip to the finals and the school will be playing in its 18th NCAA championship.

“I am so proud of them and all they have done this season,” concluded the Lady Paladin coach.