The Wofford Terriers completed their best season with their best finish in the SoCon Championship, but they did it with mixed emotions. Finishing second, the highest finish in the program’s history was significant, but the Terriers were so close to an even bigger accomplishment. “We played so well […]

Alex Hamilton has resigned as Wofford men’s golf coach. The Aiken native is leaving the school to join Callaway Golf as the company’s College and Amateur Development representative. “I am sad to leave my players and hate the timing,” he said. “Wofford is an incredible place to work […]

Every young golfer has imagined making a birdie on the final hole to win a tournament. Andrew Novak may have practiced that way as a kid, but on Sunday he got to live the dream. The Wofford alum rolled in a 10-foot birdie putt on 18 to […]

Near miss for Nimmer at Colonial

Bryson Nimmer won the individual titles in Clemson’s first two tournaments of the season. He came close to making it three in a row with a second place finish at the Nike Collegiate Invitational. The college tournament played at the famous Colonial Country Club in Fort Worth included […]

A pair of Furman golfers and a Wofford freshmen were honored by the Southern Conference after the completion of the SoCon Golf Championship in Pinehurts. Furman’s Keller Harper was named the SoCon golfer of the year. The Paladin sophomore finished in fourth place at the tournament after challenging […]

The Lady Paladins added two signees who should help keep the Furman program moving forward. Wofford has signed three players to get the Terriers back in the SoCon title hunt. Furman is currently ranked seventh in the national polls at the end of the fall season. The defending […]

The Wofford Terriers have named Alex Hamilton as their new golf coach. Hamilton takes over for the retiring Vic Lipscomb who guided the program for 13 years. Hamilton was the head golf coach at South Alabama and has a long and successful background in the sport in South Carolina. “During […]

Tigers and Novak lead at Furman

The Clemson Tigers shot their way into the lead after 36 holes at the Furman Intercollegiate. The Tigers shot a 12-under par round of 276 for a two-day total of 20 under par. Clemson is trying for their fourth tournament win in a row and has an 11 […]

Area college teams and players turned in very strong performances during the opening week of fall tournament play. The Lady Paladins and Haylee Harford won the Minnesota Invitational, Wofford’s Andrew Novak took top honors at the Badger Invitational in Wisconsin and Limestone’s Cabrick Waters was the winner at the […] 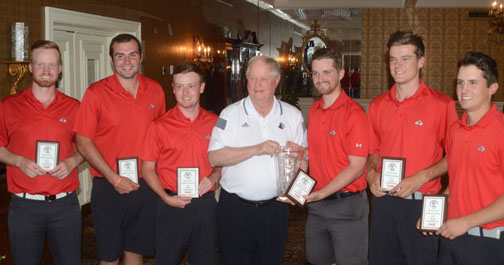 The Gardner-Webb Bulldogs rallied at the perfect time to save a victory at the Coca-Cola Wofford Invitational played at The Country Club of Spartanburg. The Bulldogs started the final round trailing Wofford on the Terrier’s home course by four shots. As the final round neared the halfway point the […]