Wofford alum Andrew Novak drains a 50 foot put on the 17th hole to set up the opportunity for a win on the Korn Ferry Tour. (PGA Tour photo)

Every young golfer has imagined making a birdie on the final hole to win a tournament.

Andrew Novak may have practiced that way as a kid, but on Sunday he got to live the dream.

The Wofford alum rolled in a 10-foot birdie putt on 18 to win the Lecom Suncoast Classic on the Korn-Ferry Tour.

“This is just awesome,” Novak said. “I don’t remember half of what happened in the last 30 minutes. It’s been kind of crazy,” he added.

Going to the final two holes Novak trailed  the tournament leader John Chin by a shot, but Novak had plenty of company within striking range of the leaders.

“If you made a bogey or a double you were falling fast. You had to be on every shot. Everybody was playing well. It was really bunched up,” he said.

On the 17th hole Novak rolled in a 50 foot putt for birdie. He was now tied with the leader who had finished his round and was waiting to see if there would be a playoff. 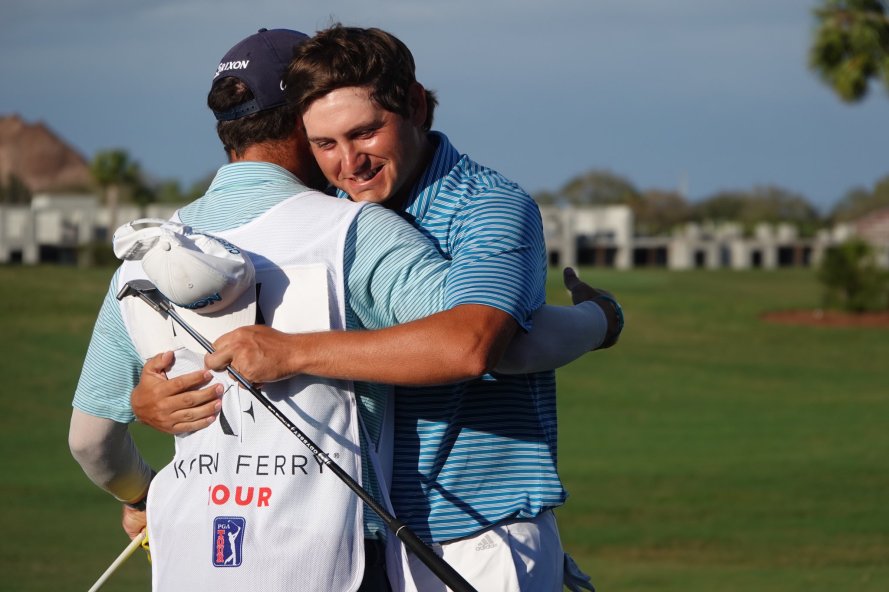 Novak handled the pressure on the final hole. He took advantage of a favorable breeze to get his second shot into range for a second straight birdie.

“The wind was perfect. I just kind of threw it out there and let the wind bring it back towards the hole. I caught  it perfect and it worked out perfectly,” he said.

Novak nailed his approach shot from 204 yards as it settled 10 feet from the pin.

As the former SoCon golfer of the year walked up to the final green he was greeted by a big ovation. The crowd filled the stands giving Novak the feeling he was playing what could be his final shot of the event in a stadium rather than a country club.

“I like playing in front of people. I like crowds, so this was perfect,” he said. “”I grew up playing other sports, and you see in all those sports where everyone is playing in front of crowds. I like making people cheer, so it was perfect for me. They all gave me a big ovation. I hadn’t made the putt yet or anything. I definitely felt the love there, he said.”

While the crowd settled down Novak would avoid a playoff with a 10 foot birdie putt to win the tournament.

“I was so locked in for the last 20 minutes,” he said. “I actually made it a bit of a point not to take too long (on the last putt) and not try to overlook it,” he recalled. 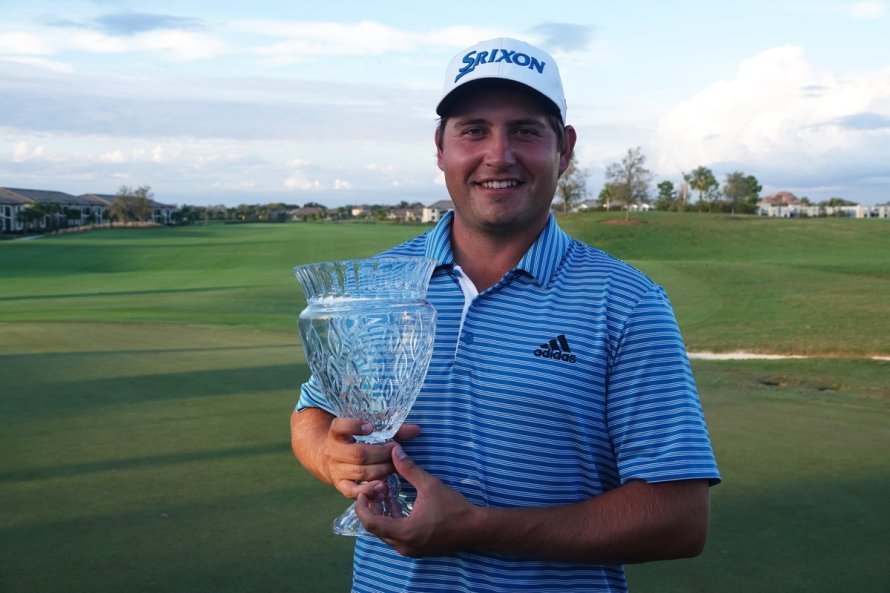 The win also makes Novak exempt for the rest of the season which will give the former Terrier the opportunities needed to finish in the 25 and earn his way onto the PGA Tour.

“This has been what I’ve been working three years for since I turned pro, and even before then in college and all those hours. It’s awesome to have an opportunity. I’ve still got more work to do—one win doesn’t lock it up (PGA TOUR card)—but this is obviously a great start, he concluded.