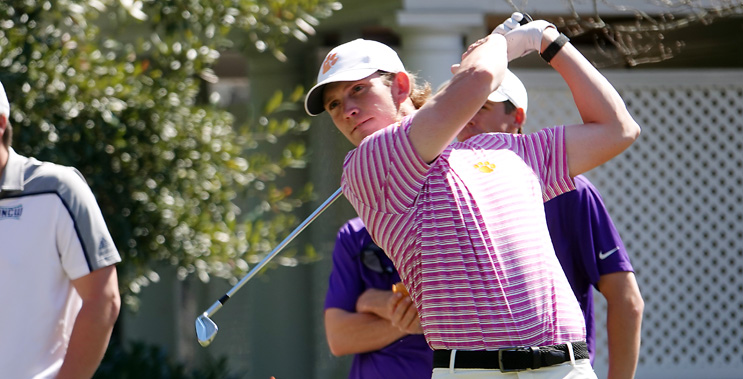 Bridgeman tied for the lead at the ACC Championship

Jacob Bridgeman was having one of those days. When Bridgeman has one of those days it seems like every putt is going in the hole and today in the second round at the ACC championship, almost everyone did. The Clemson senior shot an opening round 3-under par69 to […]

Georgia’s Trent Phillips kept a share of second place after the second round of the SEC Championship at the Sea Island Golf Club on St. Simons Island. The Bulldog senior shot a 1-under par 69 to hold on to the position he had after the first round of […]

In the world of Big South Women’s golf Campbell University’s team is not the Camels, they are the 1,000 pound gorillas. The Campbell Gorillas won five straight Big South titles. They have been to 10 straight NCAA Regionals and were ranked 38th in the country, almost 100 places […]

USC Upstate dropped off the lead at the Big South Women’s championship, but not very far. The Spartans had the first round lead and put some distance between themselves and the rest of the field early in the second round at The Patriot Golf Club near Ninety Six, […]

Upstate and Wofford bring back wins from Florida tourney

USC Upstate won the team title and Wofford’s Beca Earl was the medalist as the two Spartanburg schools brought home all the hardware from the Lady Bison Classic at the Bay Point Golf Club in Panama City, Florida. Battling a very demanding golf course was only part of […]

First round of the NCAA Regionals are underway and Palmetto State teams and golfers are in the hunt for a qualifying spot to advance to the national championship. Tallahassee Regional Furman’s Keller Harper, a three-time SoCon Player of the Year, shot a 3-under par 68 to hold the […]

The USC Upstate Women’s golf team had a record setting year. The accomplishments of the Spartans has been recognized by the Big South Conference with a number of season ending awards. Upstate put four golfers on the All-Conference team and won the freshman of the year and coach […]

A South Carolina golfer and one from USC Upstate both are celebrating individual victories in each of their conference tournaments. In Birmingham, at the Graystone Country Club, Pauline Roussin-Bouchard was the medalist in the SEC Championship. Rousin-Bouchard is the top ranked GolfStat Poll player in college golf. At […]

Both USC and USC Upstate are second in conference tournaments.

A pair of women’s college conference championships are underway and teams that have USC on their golf bags are doing pretty well. South Carolina is the top ranked team in the GolfStat national women’s college golf rankings. After the first two rounds of stroke play, USC is in […]