Adams leads the SCGA Amateur going into the final round

Zach Adams doesn’t have an elaborate technical or emotional answer as to why he is playing his best golf of the summer in the SCGA Amateur. “It’s patience, just patience,” said the recent high school grad who will be playing for the Gamecocks this fall. After spending the […]

The Anderson University golf team held an invitational last week, not on their home course at Cobbs Glen, but instead at the Rumbling Bald Resort’s Apple Valley course. It was supposed to be the CGA Women’s Four-Ball championship, but it ended as an intra-squad scrimmage for four members […]

The ceremonial trophy Madison Messimer received for winning the CGA Women’s Amateur championship is almost as big as the 15 year old golfer. Finishing in front of the field which included dozens of outstanding college golfers from the Carolinas was an accomplishment that even dwarfed the big trophy. […]

Sydney Roberts was very happy when she shot a 7-under part 65 to win the Lady Rebel Invitational High School Tournament at River Falls Plantation. The Chesnee golfer was even happier after winning her first Carolinas Golf Association championship. Roberts won the Jimmy Anderson Girl’s Invitational in Jacksonville, […] 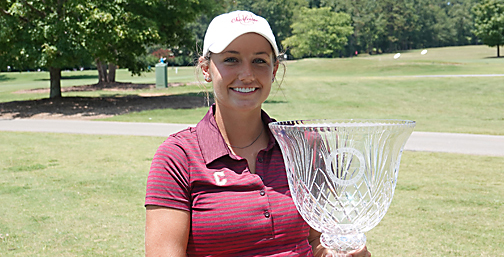 Thomas Todd from Laurens shot a 4-under par 68 to earn a share of the lead after the first round of the Carolinas Golf Association Mid-Am. The CGA major event is being played at The Reserve Club on Pawleys Island Todd is tied with Daniel Neveu from Pinehurst […]

Gracyn Burgess is going to be a lot stronger by the end of the summer. The future Clemson golfer has been lifting some very big heavy trophies this year. She became the first junior girls’ golfer in Carolinas history to win the Carolinas Junior Girls’, Twin States Junior […]

Carly Lyvers held a portion of her first round lead while Gracyn Burgess, Jodee Tindal and Emily Hawkins tied the Simpsonville golfer for the top spot going into the final round of the Carolina Junior Girls championship. The four golfers will start the final round tied at 1-under […]

Jacob Bridgeman was the defending champion at the CGA Junior Boys championship. Last year’s champion didn’t win, but he didn’t go down without a fight. Bridgeman started the final round tied for seventh place. He opened the tournament with a 3-under par 69, but struggled to a 1-over […]