It was easier to comprehend the start of the PGA Tour year when TV cameras showed pictures of palm trees in Hawaii rather than stadiums full of football fans. The Sony Open in Honolulu starts on January 2, but between then and now there are 14 PGA Tour […]

BMW second round plagued by rain

There is one name you will not hear much about when and if the BMW tournament can survive the weather and finish on Sunday. His name is Randy Long. He is the golf course superintendent at Thornblade Club. He and his crew had to find a way to […]

After the second round of the Web.com Qualifying school in Arizona USC grad Matt NeSmith was looking at a pretty high hill to climb. NeSmith started the third round outside the top 40 finishers who would earn guaranteed playing privileges on the Tour in 2019. NeSmith shot a third […]

Wofford grad Andrew Novak and USC grad Matt NeSmith have both advanced to the Web.com Q-School finals in December. The two professionals have assured themselves status on the Web.com Tour for next year at a minimum. NeSmith rallied in the final round of the qualifying tournament at Southern […]

USC grad Matt Nesmith has earned a spot in the second stage of the Web.com Tour School. NeSmith, who won the SEC individual title while at South Carolina finished in a tie for 7th at the qualifying tournament at Callaway Gardens. NeSmith shot four straight rounds of […]

Former SEC individual champion Matt NeSmith from South Carolina has advanced to the second stage of the Web.com Qualifying School. NeSmith is joined by Mark Silver, another former Gamecock, who also finsihed in the top 22 to earn the opportunity to move on from the first stage. NeSmith […]

South Carolina and Clemson will next play in the NCAA Championship in Oregon. Both Palmetto State schools advanced through regional competition and now will have a chance to play for a national title. South Carolina was sharp from the start to the finish of the Tuscaloosa Regional in […]

NeSmith and Gamecocks win at Aiken

The South Carolina Gamecocks continued to play some of their best golf at their home away from home, the Palmetto Golf Club in Aiken. USC won their second straight Cleveland Golf – Palmetto Intercollegiate by leading the 54 hole event from start to finish. Senior Matt NeSmith claimed […]

While they are on opposite sides of the country, both Clemson and South Carolina hold commanding leads going into the final round of tournaments. The South Carolina Gamecocks are in position to win their second straight USC Aiken Cleveland Golf Intercollegiate at the Palmetto Golf Club in Aiken. […] 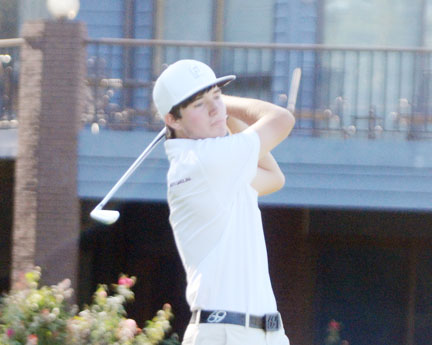 NeSmith and Proveaux advance at US Am

Two golfers with ties to the USC golf program have advanced to the round of 36 at the US Amatuer championship at Olympia Fields Country Club. USC senior Matt NeSmith won his match as did future Gamecock golfer Caleb Proveaux who is a senior at Gilbert High School. […]