Clemson’s Williams Nottingham has won the North-South Amateur on the famed #2 course at Pinehurst. The rising sophomore won the final match over James Anstiss of New Zealand 1-up. “When you see all the history and the great players who have won this tournament this is really a […]

The July issue of The Golf Club newspaper is now available at almost 70 locations in the Upstate. The paper is free and can be picked up at most golf courses, clubs, ranges and shops in the area. If you can’t pick one up, please remember you can […]

Nimmer in second at Dogwood Am

Clemson rising junior Bryson Nimmer is in second place after the first two rounds of the Dogwood Invitational in Atlanta. Nimmer has shot rounds of  65 and 68 to get to 11-under par and a total 133. The Tiger’s rising junior trails tournament leader Dawson Armstrong, from Lipscomb […]

Clemson’s rising sophomore William Nottingham survived a 22 hole match in the semi-finals to earn a chance to play for the championship of the North & South Amateur in Pinehurst. Nottingham defeated two top college and amateur golfers to advance in the 117th edition of the classic amateur […]

Gracyn Burgess looked like she had her second straight CGA Twin State girls championship locked up until the final hole. Entering the final round the future Clemson golfer trailed first round leader Phoebe Carles by a shot. While Carles faded Burgess was able to move ahead and take […]

Srinivasan qualifies for US Amateur

Natalie Srinivasan will be playing in the US Women’s Open in July. She then will have a couple of weeks off before she plays in her second USGA championship this summer. The Spartanburg golfer earned one of six spots in the US Amateur qualifying tournament at Settindown Creek […] 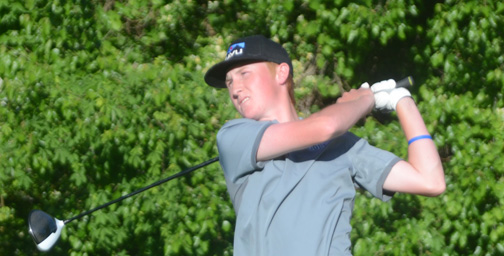 George Eubank, Jr. from Spartanburg shot a two day total of 5-under par to win the  Trusted Choice Big I South Carolina National Championship qualifying tournament. Eubank shot rounds of 70 and 69 for the 139 total and a one shot victory over Levi Moody of Travelers Rest. […]

Nathan Franks posted a 3-under par 69 to hold the lead after the first round of the Coca-Cola Spartanburg County Junior Amateur at Three Pines. Franks has a one shot lead over Zack Phillips who shot an opening round 2-under par 70. Parker Fain and Trey Howard each […]

Carles leads first round at Twin-State

Phoebe Carles has been moving up leader boards in Carolina girls events for the past two years. The 15 year old from Clinton got to the top of one in Greensboro as she has the first round lead at the Twin State Girls’ Championship. Carles, who is […]