Carles leads first round at Twin-State

Phoebe Carles from Clinton has the first round lead at the Twin State Girls’ Championship. (CGA Photo)

Phoebe Carles has been moving up leader boards in Carolina girls events for the past two years.

The 15 year old from Clinton got to the top of one in Greensboro as she has the first round lead at the Twin State Girls’ Championship.

Carles, who is a rising high school sophomore, shot an opening round 1-under par 71 to hold a one shot lead over defending champion Gracyn Burgess of Lexington.

The CGA event is being played at the Starmount Forest Golf Club in Greensboro.

“My approach shots were key. Playing smart on where the pin locations were helped me a lot, because catching a downhiller is death,” said Carles. “I just need to continue to play how I usually do and go from there,” she said.

Burgess, a future Clemson golfer, has put together a winning streak that included wins at the Vicki DiSantis Junior,  and just last week won the WSCGA Junior Girls championship. 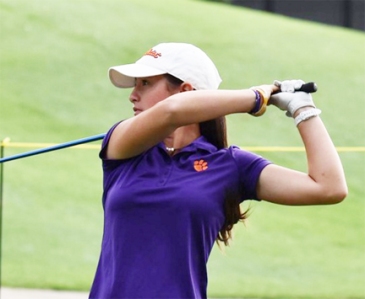 The defending champion, Gracyn Burgess of Lexington is one shot off the lead. (CGA Photo)

“The course is playing pretty tough and the greens are playing fast,” said Burgess I just have to go out there tomorrow, hit it tighter, and try not to have any three-putts,” said Burgess.

Kennedy McGaha of Honea Path shot a 1-over par 73 and is tied with three other golfers for third place. Elle Johnson of Inman is in seventh.

Trailing by one shot Burgess hopes her experience can help her earn a second straight championship in the event.

“I think there is a little pressure. If I just go out and did what I did today, I will have a chance to pull it out,” said the defending champion.

The CGA contributed to this story.