The Chesnee girls golf team won their second tournament of the new high school season with a victory at The Lady Rebel Invitational played at River Falls Plantation. The Eagles shot a team total of 309 to edge out the defending South Carolina AAAAA champions from Lexington High […]

Todd in final 8 at US Senior Amateur

Walter Todd from Laurens has made the round of eight at the US Senior Amateur championship. Todd won two matches on Tuesday to advance to a quarter final match against Bob Royak from Alpharetta, Georgia. Todd earned his way into the round of 36 with a comeback win […]

When the Carolinas Golf Association’s Vicki DiSantis Girl’s Championship began Williamston’s Chloe Holder was one of the many good players competing in the CGA major junior event. When the tournament was over Holder added a top of the resume win and took a step forward to now be […]

Todd advances at US Senior Amateur

Walter Todd from Laurens shot a second straight 2-over par 74 to finish the stroke play portion of the US Senior Amateur in a tie for 26th place. Todd will face Don Whittemore who finished 36th in the 36 hole qualifying tournament in a round of 64 match […]

Sun shines at the Upstate Amateur

It was a cloudy day for the final round of the Sixth Upstate Amateur championship, but Sun shined anyway. USC Upstate senior golfer Sun Paripunna shot a 6-under par 66 to claim the championship at Green Valley Country Club. He managed to post a two day total of […]

First round results for locals at the US Senior Am

South Carolina is well represented in the US Senior Amateur being played at the Old Chatham Golf Club in Durham. Six golfers with ties to the Palmetto State are in the field for the championship. After the first round of stroke play Dean Channell fro Cary, NC […] 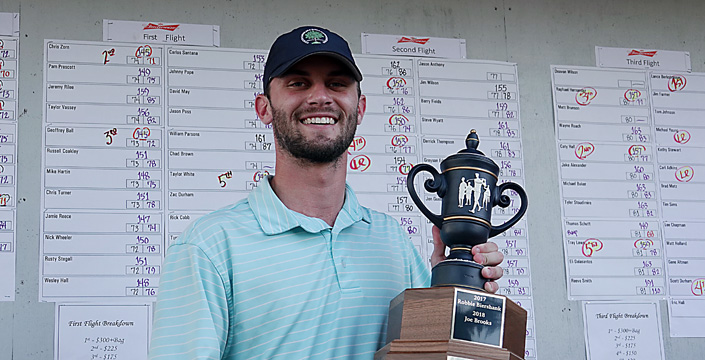 This Bud’s for Patterson

Cole Patterson has played some of his best golf in the Budweiser Classic. The recent Presbyterian grad shot rounds of 66 and 68 for an 8-under par total in the 2016 tournament.  Most years a 134 total would have been good enough for a win. Instead, Patterson finished […]

Rock Hill’s Zach Reuland won the boys title and Katherine Schuster from Kill Devil Hills, NC claimed the girls title at the Beth Daniel Junior Azalea played at the Country Club of Charleston. Reuland led from start to finish to claim one of the biggest events on the […]

A pair of Upstate seniors and two Anderson University golfers captured the championships at the Carolina Golf Association’s Women’s Four-Ball tournament at the Carolina Country Club in Spartanburg. Rising sophomore Victoria Hall and incoming freshman Emma Charles teamed up to win the women’s championship by a shot. The […]