Warren remembers his State Am win at Thornblade

This week Thornblade Club will host the 88th South Carolina Golf Association Amateur. It is the second state championship to be held at the club. The first one was played 22 years ago. The field for the 1997 tournament included seven future PGA Tour players, over two […]

Gravley qualifies for US Senior Amateur

Mike Gravley will tell you himself he is pushing the envelope. Just a few days short of 65 his best golf days may be fewer, but every once in awhile the ghost of games past can take over. Gravley found something at the Country Club of Lexington during […]

Hear from 2019 Greenville County Amateur champion Cole Patterson after his victory in the 52nd annual championship. Cole Patterson has come close to winning tournaments more times then he cares to remember. He can remember a top five finish that should have been a win and a pair […]

The top of the leaderboard at the Greenville County Amateur had some big changes after the second round of the championship being played at the Fox Run Country Club. A pair of former college golfers hold a one shot lead over the field. Defending champion Danny Brock, a […]

The 2018 South Carolina Golf Association player of the year has a share of the lead after the first round of the Greenville County Amateur Championship. Robert Lutomski. who was honored as the state player of the year last year and future Limestone golfer Walker Redmon each shot […] 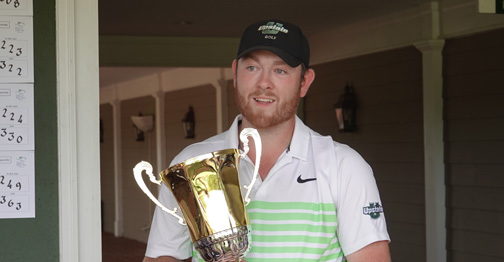 Carter leads from wire to wire to win Spartanburg Amateur

Carter keeps the lead in Spartanburg

Matt Carter was a co-leader after the first round, but after 36 hole at the Spartanburg County Amateur being played at the Carolina Country Club he has the top of the leader board to himself. The former USC Upstate golfer shot a 2-over par 74 to go along […]