This Bud’s for Patterson

Cole Patterson won the Budweiser Classic shooting rounds of 65 and 70 for a 135 total.

Cole Patterson has played some of his best golf in the Budweiser Classic.

The recent Presbyterian grad shot rounds of 66 and 68 for an 8-under par total in the 2016 tournament.  Most years a 134 total would have been good enough for a win.

Instead, Patterson finished in second place as former Clemson golfer Carson Young finished at 11-under par.

Playing in the tournament for the first time since his runner-up finish three years ago Patterson once again put up a low number on the leader board in the first round.

Patterson shot a 7-under par 65 at Pickens Country Club this year and like the last time he played in the Budweiser he was close to the lead, but another golfer was a little better.

Last year’s winner, Joe Brooks from Franklin, North Carolina, had the lead to open the tournament. Brooks posted an 8-under par 64 to be one shot in front of Patterson.

“I guess I wondered if the same thing was going to happen to me this year,” said Patterson. “I wanted to try not to let it happen again,” he said.

Since you can’t play defense in golf, Patterson was left with the only other option.

Shoot another low score in the second round.

While Matt Norris and Dallas Odom were close enough to be in the final group, it was Brooks and Patterson who would battle for the lead all day. 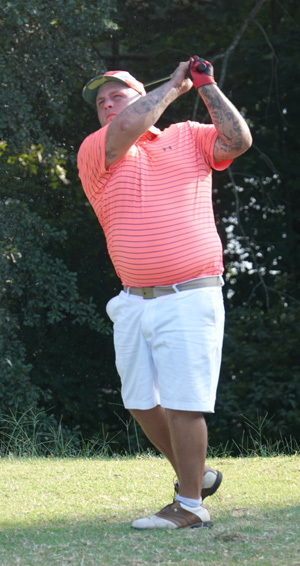 Matt Norris finished in third place at the Budweiser at Pickens Country Club.

Patterson took the lead on the front nine, but Brooks caught him and the two played even until the middle of the back nine.

A good birdie by Patterson and a bad bogey by Brooks allowed Patterson to take a two shot lead.

Brooks double crossed his tee shot and carded a bogey.

“I ran in a 25 foot birdie on number 12 and that put me two up and I was able to hold that lead until the last hole,” said Patterson.

The 2019 Greenville County Amateur champion’s tee shot on 18 ended up off the fairway in some rough surrounded by trees. His only option was to punch out.

Brooks hit a solid drive, a good second shot and had a 10 yard pitch from just below the green for an eagle to tie Patterson.

The defending champions chip scared the hole, but rolled past the cup.

Brooks made a sliding down hill 6-footer for his birdie.

Patterson was left with a 35 foot birdie putt.

“I knew I had a two shot lead so all I wanted to do was get it close,”he said.

Patterson tapped in from a foot for the win, his second in his last two tournaments. He finished with a 2-under par 70 for a 135 total.

His two day total of 9-under par was one shot better than the last time he played in the tournament.

“I’ve been playing well. It was a little closer than the Greenville County. but I hit enough good shots to win,” he said.

Brooks shot an even par 72 while Norris finished in third with Odom fourth and Sandy Thornton and Steve Reid tied for fifth. 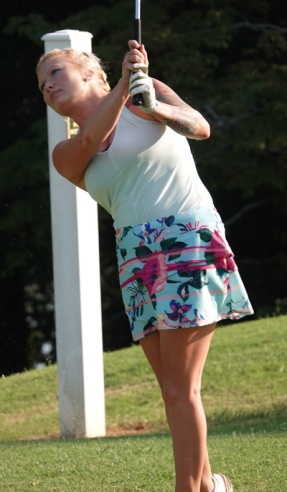 Dallas Odom finished at 3-under par in fourth place.

The Budweiser Classic usually draws the biggest field of amateurs for a weekend tournament in the Upstate. This year the event was moved to Pickens Country Club from Boscobel and almost 200 golfers teed it up for the 36 hole annual event.

The tournament has grown to include a large number of golfers from both Georgia and North Carolina joining Upstate golfers for the tournament and the included free libation from the sponsor.