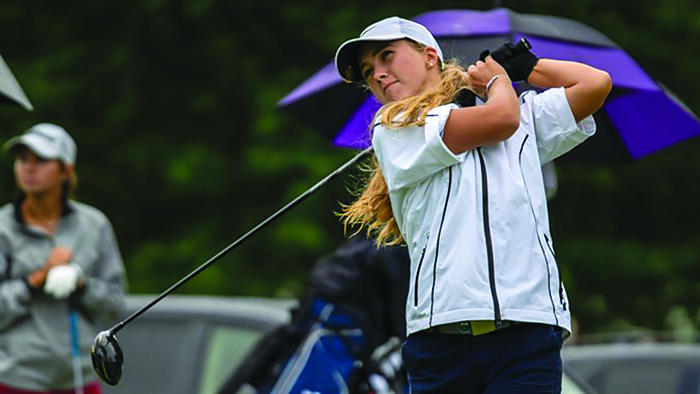 Chloe Holder from Williamston won the Vicki DiSantis Junior Championship. The tournament is one of the CGA Major junior events during the year. (CGA Photo)

When the Carolinas Golf Association’s Vicki DiSantis Girl’s Championship began Williamston’s Chloe Holder was one of the many good players competing in the CGA major junior event.

When the tournament was over Holder added a top of the resume win and took a step forward to now be considered among the best juniors in the two states.

Holder, a rising high school junior, opened a two shot lead with a birdie on her final hole in the first round and made it stand up in the second round to win the championship by two shots.

The win was her second major victory of the summer adding the DiSantis title to her Women’s South Carolina Golf Association’s girls championship.

“I still have a long way to go, but this shows me when I play my best golf I can be a contender in any tournament,” she said.

Holder used outstanding iron play to put the ball tight all day. She finished the first round with two birdies and a bogey for a 1-under par 71.

Holder topped a strong field to win the championship at Pine Island Country Club in Charlotte.

Playing in the last group on the last day, Holder was paired with the 2018 CGA Junior Player of the Year Katherine Schuster.

Schuster had just come off of a two impressive wins in the Beth Daniel Junior Azalea and the Hope Valley Junior Classic. She also won the North-South Junior at Pinehurst and was the  the reigning North Carolina girls champion.

And by the way, she also is a rising junior who has made an early commitment to play college golf at Clemson.

“I had played with her last year in the same tournament. I knew she could drive the ball a long way, but I couldn’t pay attention to that, I just had to play my own game,” said Holder.

Schuster and Macy Pate from Boone were tied for second after the first round.

Even with a two shot lead, Holder didn’t feel she got everything out of her round.

“I could have gotten frustrated in the first round when I wasn’t able to make anything happen, but I didn’t put any pressure on myself because I knew I had another round to play,” said Holder.

Early in the second round it looked as if Schuster might be in position to move up.

Holder bogeyed her third hole which allowed Schuster to get within a shot of the lead.

“When I won the South Carolina girls tournament I made a few mistakes when I was in the lead. After I made the bogey the experience I gained going on to win that tournament helped me get back on track,” she said.

Holder birdied four of her next five holes.

The birdie barrage gave her a four shot lead over Schuster and the rest of the field.

“When I made those three birdies in a row on 9, 10 and 11 it showed everyone that I was here to play and I wasn’t going to go away,” she said.

With a comfortable cushion over the field Holder was able to relax and reel off four straight pars and put the win within her reach.

“I learned another lesson late in the second round. I got too comfortable with the big lead. I made a bogey on 16 from the middle of the fairway and another bogey on 17. It was a lack of focus and I won’t let it happen again,” she said.

Holder parred the final hole to finish the tournament as the only golfer under par in the field. Her two day total of 143 was two shots better than Alexia Siehl from Fort Mill who moved up to second place with a second round 1-under par 71.

Rock Hill’s Kayleigh Reinke finished in third place while Schuster dropped back into a fourth place tie with Victoria Cook from Reidsville, NC.

Three other Upstate girls cracked the top-20. Mary Kathryn Talledo from Boiling Springs tied for ninth place. Isabella Britt from Chesnee finished in a tie for 11th place and Sofia Carles from Clinton tied for 17th.

The win in the DiSantis and the Palmetto State Junior championship are accomplishment’s Holder is hoping get noticed by college golf coaches.

While Schuster has made her commitment to Clemson, Holder is in the process of evaluating opportunities to find the right place for her education and golf to continue.

The Palmetto High School student hopes to play college golf and the closer to home she can play, the better.

The win in the South Carolina State Junior championship earned Holder an invitation to several AJGA events, including the AJGA Girls Championship at Furman on August 31st to September 1st.

“I know that is an important tournament as far as college coaches are concerned, so I want to keep my momentum going this coming weekend,” said the DiSantis champion.