Morgan and Burgess lead WSCGA Am

Anna Morgan is on a roll. The Lady Paladin golfer won the Carolinas Women’s Amateur last week and shares the lead after the first round of the Women’s South Carolina Golf Association’s Amateur championship. Clemson golfer and former SCJGA Beth Daniel Player of the Year, Gracyn Burgess, matched […]

When do two Bs equal an A? When it comes to signing two of the top golf prospects in the state of South Carolina. Two players with an initial B in their last name has given the Tigers an early jump on an outstanding recruiting class. Clemson signed […] 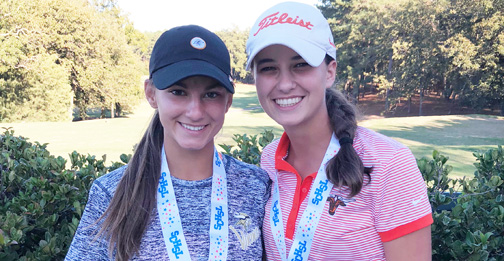 Johnson and Dunlap finish 1,2 in AAAAA

Elle Johnson was not just playing in a golf tournament, she was on a mission. The Spartanburg golfer had a goal to play her best golf in the AAAAA state championship. “I wanted to redeem myself because I have not played very well in the state championship,” Johnson […]

While Lexington has a big lead in the AAAAA team competition the battle for the individual top spot is tight. Gracyn Burgess of Lexington and Elle Johnson of Spartanburg are tied for the lead after the first 18 holes of play. Upstate champion Emily Dunlap from Mauldin is […]

Weary and McBride, Burgess and Evans win The Tradition

Last year Drew Weary and Brandon McBride left Pebble Creek disappointed after missing a chance to win The Tradition on the final hole. Since that time the two golfers from Bluffton have pointed to this year’s tournament to have the opportunity to erase the bad memory of a […]

The top ranked team in the most recent South Carolina Girls golf poll and the 2016 SCJGA Player of the Year are on top of the High School Invitational at Cat Island. The sixth annual tournament is promoted by the Women’s South Carolina Golf Association Junior Foundation. The […]

Gracyn Burgess is going to be a lot stronger by the end of the summer. The future Clemson golfer has been lifting some very big heavy trophies this year. She became the first junior girls’ golfer in Carolinas history to win the Carolinas Junior Girls’, Twin States Junior […]

Carly Lyvers held a portion of her first round lead while Gracyn Burgess, Jodee Tindal and Emily Hawkins tied the Simpsonville golfer for the top spot going into the final round of the Carolina Junior Girls championship. The four golfers will start the final round tied at 1-under […]

Gracyn Burgess looked like she had her second straight CGA Twin State girls championship locked up until the final hole. Entering the final round the future Clemson golfer trailed first round leader Phoebe Carles by a shot. While Carles faded Burgess was able to move ahead and take […]