A weather forecast that included a lot of rain, wind and in general nearly impossible playing conditions forced both the ACC Men’s and Women’s tournaments to adjust their schedules. Instead of playing 18 holes on Thursday, Friday and Saturday both tournaments played 36 holes on the first day. […]

Harford and Hewson finish in Top-10 at Augusta

Natalie Srinivasan, the SoCon Player of the Year, led Furman to a solid second place after the first round of the NCAA Tallahassee Regional. Srinivasan carded a 7-under par 65 as the Lady Paladins finished the first 18 holes at 8-under par. The Dorman High School grad trails […]

The Clemson women’s golf program is five year’s old has improved every year. This year the Tigers progress was measured by their best finish in the ACC championship. Clemson came in third place, one shot behind Florida State, in the championship played at the Grandover Resort in Greensboro. […]

Huskey springs into Spring with win

South Carolina’s Keenan Huskey shot a bogey free 7-under par in the final round to claim the individual title at the first tournament of the Spring. Huskey won his fourth individual title with a two-shot victory at The All-American tournament played at the Golf Club of Houston. The […]

Furman saved their best golf for the last round of the Betsy Rawls Longhorn Invitational. The Lady Paladins posted the lowest final round and climbed up six places on the leader board to finish second. Texas won the tournament on their home course. US Women’s Amateur champion Sophia […] 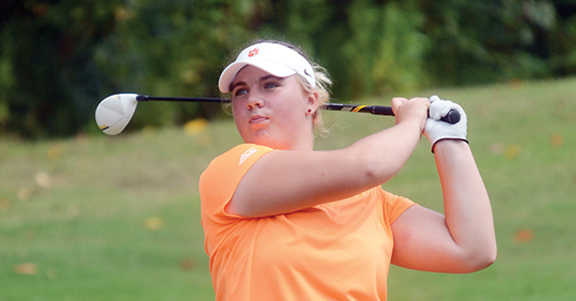 Clemson’s Alice Hewson shot rounds of 70 and 67 for a 137 total and the lead at the Betsy Rawls Longhorn Invitational. The Clemson junior has a one shot lead over University of Texas golfer Emilee Hoffman who shot a 138 total on her home course in Austin. […]

Stephenson advances, Hough and Hewson out

Alabama golfer Lauren Stephenson from Lexington advanced into the Round of 32 at the US Women’s Amateur in San Diego. Stephenson won her opening match 3&2 over Erin Fahey from Bowling Green University. The All-SEC golfer trailed in the match at the turn. On the back nine, Stephenson […]

Clemson’s Alice Hewson has advanced to the match play portion of the USGA Women’s Amateur championship. The rising junior finished the stroke play qualifying portion of the championship tied for fifth place. Hewson shot rounds of 71 and 70 for a 141 total. Alabama golfer Lauren Stephenson from […]