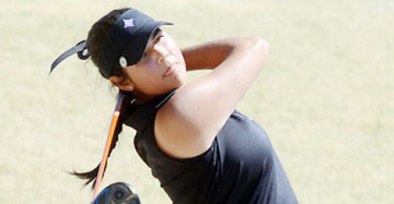 Natalie Srinivasan shot a 7-under par 65 to help the Lady Paladins to 2nd place after the first round of the Tallahassee Regional. (File Photo)

Natalie Srinivasan, the SoCon Player of the Year, led Furman to a solid second place after the first round of the NCAA Tallahassee Regional.

Srinivasan carded a 7-under par 65 as the Lady Paladins finished the first 18 holes at 8-under par. The Dorman High School grad trails individual leader Wenyung Keh of Washington by 2-shots.

“Natalie played a great round of golf, shooting 65,” said Furman head coach Jeff Hull following the round.  “She has been really close to going low like this, so it was great to see her put it together,” he said.

The Lady Paladins shot a 280 total to trail Washington by 7-shots. Top seeded Alabama shot a 283 total to be in third place 3-shots in front of Clemson and Tennessee.

“I am very pleased with the way we started the regional. Eight-under par is a solid start and puts us in a good position with two rounds to play.  I am very excited for the next two days of competition,” said Hull. 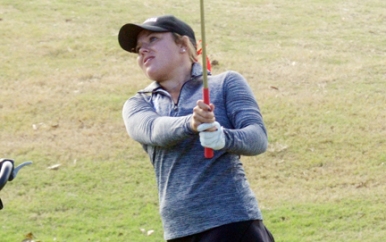 Alabama’s Lauren Stephenson, from Lexington, opened the regional with a 5-under par 67. (File Photo)

Alabama’s Lauren Stephenson, from Lexington, SC carded a 5-under par 67 to be in third place among the individuals in the tournament. Her team is also third at 6-under par.

The Clemson Tigers counted three 71s and an even par 72 to be tied with Tennessee going into the second round on Tuesday.

Alice Hewson, Kennedy Swann and Sydney Legacy all shot rounds of 1-under par with Ana Paula Valdes adding an even par round to give the Tigers their 3-under par total.

“We got off to a slow start, but the girls stayed patient and made some putts on the back nine,” said Clemson coach Kelley Hester. 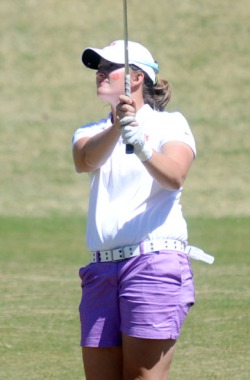 Sydney Legacy is one of three Clemson golfers who shot 1-under par 71s to help the Tigers to a tie for fourth place. (File Photo)

Clemson was four-over-par as a team through the first nine holes and stood in 12th place. Hester’s team played the back nine in seven-under, including six under as a team on the last five holes, to jump eight places in the standings.

The College of Charleston is fifteenth and Coastal Carolina is sixteenth in the regional.

South Carolina, playing in the San Francisco Regional, has some ground to make up after the first round out west.

The Gamecocks are in a tie for 11th place and trail first round leader UCLA by 16 shots.

USC’s top-golfer Ainhoa Olarra, the SEC individual champion shot a 1-over par 73 to be in a tie for 33rd place.

Marial Galdiano  from UCLA, Colorado’s Brittany Fan and Andrea Lee from Stanford are all tied for the top spot after shooting 6-under par 66s.