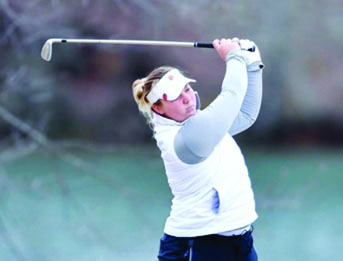 Alice Hewson shot a final round 4-under par 68 to finish ninth at the ACC Championship. (Clemson Photo)

The Clemson women’s golf program is five year’s old has improved every year. This year the Tigers progress was measured by their best finish in the ACC championship.

Clemson came in third place, one shot behind Florida State, in the championship played at the Grandover Resort in Greensboro.

“I am very proud of the girls, “ said Clemson coach Kelley Hester. “We were seeded ninth and finished third so it should give us confidence for the NCAAs,” she said.

The Tigers finished at 13 over par for the 54 hole event. The final day the team battled the Seminoles for the second spot as well as some difficult weather and course conditions.

Senior Sydney Legacy finished in a tie for 12th place giving the Tigers three golfers in the top-15 at the ACC Championship. (File Photo)

“This is a hard course and the weather today made it even tougher, but we fought  all day,” said Hester. “We and Florida State both wish we had given Duke more of a challenge, but we had quite a battle for second,” she said.

Clemson needed a pair of birdies on the final hole to get within one of FSU. Alice Hewson and Kennedy Swann made birdies and both earned top-10 finishes.

Hewson saved her best round for the last round. The Clemson junior moved up 13 places in the individual standings to ninth place after shooting a 4-under par 68. Hewson improved by 11 shots from her struggles in the second round and did not have a bogey in the final round.

“I knew Alice would play better today. She showed what she was capable of doing. We told her and all the girls just to go out and have fun,” said Hester. 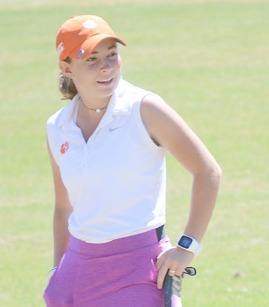 Kennedy Swann finished in 10th place at 2-over par for the Championship.(File Photo)

Swann finished at 2-over par in a tie for tenth place. Senior Sydney Legacy, who had been in the top-5 for the first two rounds, shot a 3-over par 75 in the final round and finished in a tie for twelfth place.

“This tournament was very good preparation for the NCAA Tournament. It was like playing in a regional,” concluded Hester.

The Tigers will get their NCAA Regional assignment when the women’s field is announced on the Golf Channel on April 25th at 5:30 pm.