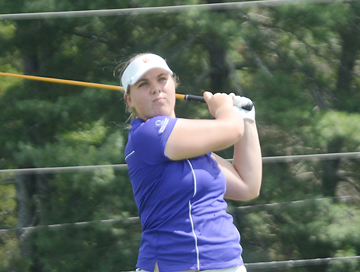 Clemson’s Alice Hewson has the lead after the first two rounds of the Betsy Rawls Long Horn Invitational, (File Photo)

Clemson’s Alice Hewson shot rounds of 70 and 67 for a 137 total and the lead at the Betsy Rawls Longhorn Invitational.

The Clemson junior has a one shot lead over University of Texas golfer Emilee Hoffman who shot a 138 total on her home course in Austin.

The tournament played 36 holes the first day and will be completed with 18 holes on Tuesday.

Hewson played outstanding golf. She had one bogey in the first round and one double bogey in the second round to go along with 10 birdies on her way to her 7-under par total.

The Clemson team is in third place after 36 holes. The Tigers trail Texas and Arizona State in the 15 team tournament.

Texas shot an 8-under par total and is the only team under par in the tournament.

Haylee Harford is the top Furman golfer in the tournament. Harford is tied for 6th place. (File Photo)

The Lady Paladins from Furman are tied for eighth place with Texas State. Furman stands at 16 over par.

Two Furman golfers are among the top-20 in the tournament. Junior Haylee Harford shot rounds of 73 and 70 for a total of 143. The Furman All-American is tied for sixth place at 1-under par.

Sophomore Natalie Srinivasan fired rounds of 74 and 71 for a two round total of 145 and is tied for 14th place.