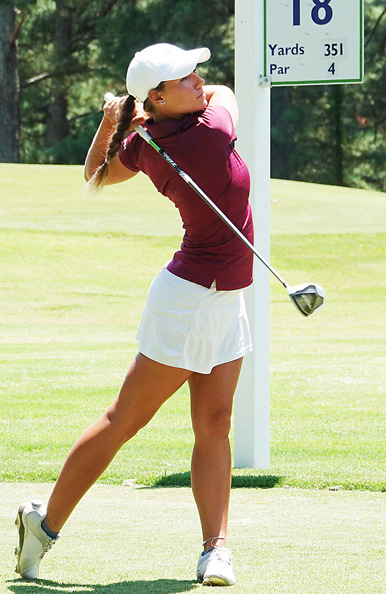 Home course advantages don’t mean much if you can’t hit the right shots at the right time.

Victoria Huskey combined her local knowledge of the Furman golf course with some outstanding shot making to win her first CGA championship.

Huskey, a rising senior at the College of Charleston this fall, topped Riley Smyth from Cary, NC 1-up to win the Carolinas Golf Association’s Women’s Match Play championship.

“Furman is where I grew up playing. I knew coming in here I would have kind of a home course advantage,” she said. “But to come in here and hit the shots I needed to win is pretty awesome,” said Huskey.

Being just a short distance from her home and with her father as her caddy Huskey qualified fifth and then breezed through her first two matches.

“I have worked a lot on how I feel on the golf course. I was pretty confident. There were sometimes I was a little shaky, but when I was shaking a little I would back off and start over,” she said.

Huskey’s next two matches were much closer. She topped Haeley Wotnosky from Wake Forest, NC 1 up to earn her spot in the final match.

Her opponent in the final, Smyth a rising sophomore at Virginia, had recently finished as the runner-up in the Carolinas Women’s Amateur.

UVA sophomore Riley Smyth finished second in both the Carolinas Women’s Am and the CGA Match Play. (CGA Photo)

The last of the three matches she won was a 2 Up victory over the top ranked junior in the Carolinas.

Smyth got off to a quick start in the championship match carding two birdies on the first two holes.

Huskey settled for pars until she put back to back birdies together on the seventh and eighth holes to even the match.

“When I was two down my dad (Victor Huskey) told me I was still in it. It was going to be a long day and keep my head in it. Even when I was down two I didn’t think I was that far off. I knew I would make some birdies coming in,” she recalled.

Huskey did just that.

After starting the back nine with a par the two-time South Carolina AAA high school individual champion put together another pair of birdies on number eleven and number twelve to go 2 up.

The two college golfers played even until the 17th hole when Smyth was able to post a birdie and cut Huskey’s lead to just one hole with the last hole to play.

A good drive and a solid second shot led to a routine par on the final hole. Huskey won her first CGA championship with a 1 up victory over Smyth.

The two-time CAA individual runner-up called on her experience to make sure she could close out the win on her old home course.

Huskey got some early round advice from her caddy/father Victor and used it to take the lead in the match. (CGA Photo)

“I felt like I had been in that position a lot lately. It was great to play and get the job done on 18,” she said.

The win gives the two-time first team Colonial Athletic Association All Conference golfer the momentum she believes will help her to get off to a good start with the Cougars.

“It definitely is special. I feel like this prepares me for coming into the season. It is my last year playing for the College of Charleston and it is time to amp it up,” she concluded.

The Second Flight was won by Mackenzie Battle from Charleston with a 2&1 victory over Julie Streng from Greensboro, NC.

Tournament scoring is available at   https://www.golfgenius.com/pages/1922362