Warren remembers his State Am win at Thornblade 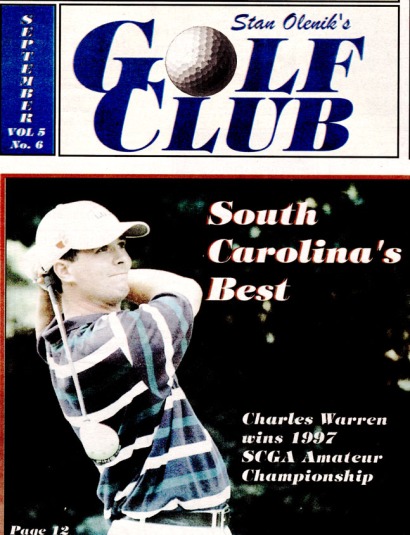 Charles Warren was featured on the cover of the Golf Club Newspaper in September 1997 after winning the SCGA Am.

It is the second state championship to be held at the club.

The first one was played 22 years ago.

The field for the 1997 tournament included seven future PGA Tour players, over two dozen golfers who had or would win different Carolinas championships and even more who played college golf.

In May of the same year, Warren became the first and only Tiger golfer to win the NCAA championship.

“Winning a state amateur is something every golfer has as a goal no matter what state you live in,” said Warren. “My best memory was I was in a playoff and was fortunate to win” he said.

Some of the details of the tournament are a little fuzzy now.

After he graduated from Clemson he began a career as a PGA Tour player from 1998 until he retired in 2012.

“Next to my memory of winning I most remember the great condition of the golf course and how Thornblade was a great host for the championship,” he said.

As a Tour player he won three Nationwide Tour events including the BMW Tournament at the Cliffs and ranked in the top-100 on the Tour’s money list several times.

Warren played a solid tournament. His opening round 73 put him in 26th place.

His third round 66 moved him into a tie for second place.

During the final round it looked as if Columbia’s Justin Roof’s early four-shot lead would be tough to beat.

Each of the three leaders had the opportunity to claim the win, but each one faltered and lost their lead.

Roof quadrupled the 8th hole, Warren double-bogeyed the 10th hole and Truett could not hold a two shot lead on 17 and 18.

Truett’s bogey and Warren’s par on the final hole set up a playoff for the championship.

“I had to get up and down from the front bunker just to make the playoff,” Warren recalled.

Both golfers parred the first playoff hole, but on the second hole the playoff almost ended.

Warren’s tee shot almost ended up out of bounds.

“I hit it right and it stopped just a foot in bounds. I was able to punch out, get up and down for a five to keep the playoff going,” he said.

On the third playoff hole Truett gunned a 25 foot birdie putt past the hole and missed the par putt coming back. Warren rolled in his par putt to claim the championship.

Warren celebrate sinking the winning putt on the third playoff hole to win the 1997 SCGA Am. (GolfClub Photo)

“When I look back at the players in the field that week there were a lot of my friends. There were many good players and getting the win was a nice way to end the summer before going back to school,” he said.

Warren retired from professional golf in 2012.

Since leaving the game he has built a successful career with Arthur J. Gallagher Insurance.

With the tournament returning to the site of his state championship, Warren has been asked if he wished he could play in the event.

Warren, who was inducted into the South Carolina Golf Hall of Fame last January, will not rule out being more involved in the game in the future, but for now he is still in jail with the USGA.

The former professional petitioned to have his amateur status returned after he retired.

The USGA ruled that because of the success he had as a pro and the total money in the purses he played for Warren got one of the longest suspensions ever given out by the ruling body.

Warren will not be eligible to return as an amateur until 2020.

“They were concerned about professionals re-entering the amateur ranks and I got a very long sentence. I have a handicap and maybe after next year I will start playing again,” he said.

Warren has family commitments this week and likely will not attend the tournament, but he expects the players to put on a show.

“Equipment and technology is better and the players are much better. I expect the scores to come in around 14 or 15 under par. These guys are a lot better than we were at the same age,” he said.

The SCGA champion used to receive a light blue blazer and a trophy.

Warren’s blazer has slipped to the back of his closet, but the trophy is still around.

“Winning the tournament and playing in SCGA events meant a lot to me and my whole family. It definitely was special to win this one,” he concluded. 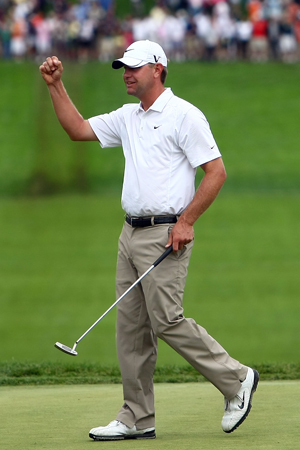 College players have dominated the championship. Since the tournament was last played at Thornblade college golfers have won 20 of the 22 championships.

During the same time period four former champions who won the state ams have gone on to win on a PGA Tour.