Morgan prevails in a playoff for second straight win 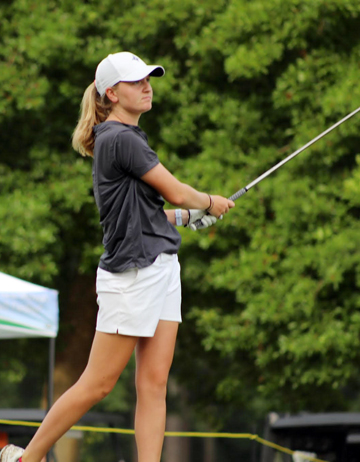 Anna Morgan completed a sweep of the two major amateur titles in the Carolinas with a win at the Women’s South Carolina Golf Association’s Championship played at the Columbia Country Club.

Last week Morgan came from 5-shots off the lead to win the CGA Women’s Am.

This week the rising sophomore at Furman had to hang on to win the WSCGA Amateur in a playoff.

It took two extra holes before Morgan was able to top her soon to be Furman teammate Savannah Hylton for the Palmetto State title.

“I had a little momentum coming into the tournament after winning last week,” said Morgan. “I played good on Monday and Tuesday and managed my game well,” she added.

But the final round was a scramble for the Spartanburg golfer right from the start.

Morgan bogeyed her first two holes and then birdied the next two holes establishing a pattern for her play the rest of the day.

“I guess I was feeling a little pressure because I wanted to back up the win last week with another win,” she said.

Future Furman golfer Savanah Hylton came from 3-shots off the lead in the final round to force a playoff with Morgan. (WSCGA Photo)

While Hylton was putting together an even par round. Morgan let the three shot lead she had entering the final round shrink to just one at the turn.

“A wayward tee shot here, a missed birdie putt there. I was playing solid, but you always want to do better and cut out the mistakes,” she said.

Morgan started the back nine the same way she started her round, with a pair of bogeys.

Hylton carded two solid pars and what once was a three shot lead now was a one shot deficit for Morgan.

“Actually number 10 was a good bogey, eleven wasn’t, but I made a birdie on the next hole and that helped me ,” she said.

The birdie stopped the roller-coaster ride for Morgan, but a birdie on the same hole allowed Hylton to take over the lead at 2 under par through 12 holes.

Morgan would match Hylton with pars on the next three holes before the junior golfer from Hilton Head got into trouble.

Hylton bogeyed the next two holes giving a one shot lead back to Morgan.

With only the 18th hole left in regulation play a par by Morgan would wrap up the win, but the Lady Paladin golfer had experienced mixed results on the hole in the first two rounds.

Morgan bogeyed the hole in the first round, parred it in the second round and hit a poor tee shot in the third round leading to another bogey.

Hylton parred the hole sending the tournament to sudden death.

The golfers played the 18th hole again and both made par before teeing up on 18 one more time.

Morgan birdied the second playoff hole to win the WSCGA Amateur at the Columbia Country Club.

This time it was Hylton’s tee shot that strayed from the fairway while Morgan played the hole perfectly to card a birdie and the win.

“You can practice shots, but you can’t practice situations. You can play little games with yourself while you are practicing, but when you are on the course and need to make a shot it is much different,” said the 2020 WSCGA Amateur champion.

The way Morgan won the South Carolina title was much different than her victory in the Carolinas Am, but last week’s win gave her the confidence to grind out the victory.

After the long lay-off due to the cancellation of most of the college season, Morgan entered the two tournaments hoping to play well.

“I want to win every tournament I play, but we were all so bummed out with the way the season ended just competing again was great,” she said.

Emma Schimpf from Daniel Island had post the low final round and low round for the tournament shooting a 4-under par 68 to move up to a third place tie with Molly Hardwick from Lexington. (WSCGA Photo)

Emma Schimpf from Daniel Island had the hot round on the final day and the low round of the tournament shooting a 4-under par 68 to move up  into a tie for third with Molly Hardwick of Lexington.

Her season stroke average was 7th in the SoCon and second only to the ANNIKA Award winner Natalie Srinivasan on the Lady Paladin team.

If the SoCon had given out their usual season ending awards, Morgan would have been a lock for freshman of the year after posting her 73.9 stroke average, best among first year players.

She also earned a runner-up finish and another top-10 during the pandemic shortened season.

Her fast start has allowed Furman fans to make some very early comparisons to some of the best players to ever go through the program.

Morgan knows she is a long way from being compared to Hall of Fame players like Beth Daniel and Betsy King, but with her two impressive wins and solid freshman year she may be on her way.

“I’d like to think I have the potential to some day play at that level. Getting these two big wins is a great start, but I know I have a long way to go to accomplish that goal,” said Morgan.

After packing two tournaments into two short weeks Morgan will take a break before playing in the CGA Women’s Four Ball championship with Furman teammate Carly Burkhardt at the Catawba Country Club later this month.

In the State Division Pam Prescott from Piedmont, just like Morgan, was trying to pull of a win in Columbia to go along with the victory she had last week in the CGA tournament.

Prescott posted identical 75’s in the first two rounds, but lost one shot in the third round to finish with a 76 and a 226 total.

Kerry Rutan trailed Prescott by one going into the final round. The Yeamans Hall golfer shot a 1-over par 73 to go from one down to two in front and the Divison title.

Karin Wolfe from the Ponderosa Club was third with Terrie Allemang from Furman and Louise Givens from Lexington tied in fourth place.

The Super-Senior championship was won by Nancy Doge from the Mid-Carolina Club.

The Mytrice Riccoboni Net Champion was Kathy McCurdy from the Country Club of Spartanburg.