The 2017 Clemson Tigers became the first team in the 87 year history of the golf program to record three straight tournament wins. Clemson pulled ahead of Virginia on the final nine holes and won the Cleveland Golf Palmetto Intercollegiate at the Palmetto Golf Club in Aiken.

The Clemson Tigers won their third straight tournament with the win at the Cleveland Golf Palmetto Intercollegiate at The Palmetto Golf Club in Aiken.

The Tigers have now won four events this season. Clemson won The Jackrabbit and the Ka’anapali Collegiate in the fall. Clemson opened the spring portion of their season with a victory in the Puerto Rico Classic and set the new school record with the win in Aiken.

Clemson started the tournament with an 11-under par team total to hold a 4-shot lead over Virginia. The tournament format called for 36 holes of play on the first day and at the end of the second 18 holes Virginia had moved into the lead by three shots.

In the final round the Tigers and the Cavaliers swapped the lead and played just about even  until the final few holes. The Tigers got late round birdies from Carson Young, Austin Langdale and Bryson Nimmer to wrap up a narrow one shot victory over their ACC foe.

“The victor today was the course,” said Clemson head coach Larry Penley. “When the wind kicked up and the greens got a little firmer and faster, this golf course played extremely difficult,” he said.

All five Clemson golfers finished over par in the final round, but four Tigers played well enough in the tournament to finish in the top-1o.

Only individual champion Derek Bard of Virginia finished at even par. The Tigers completed the 54 hole event with a score of 5-under par 835. The Cavaliers gave up their lead by shooting 13-over par to finish at 836 in second place.

“I can’t be too upset with an over par round. Our guys hung in there and we did what we needed to do. I’m real proud of them,” Penley said. 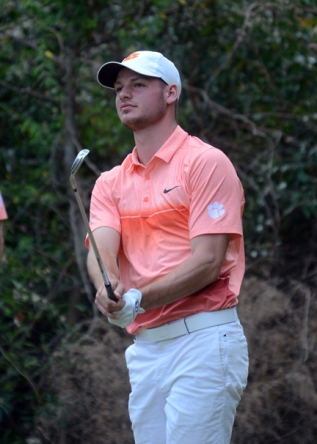 Clemson freshman Doc Redman challenged for the individual victory before finishing in second.

While the competition was close and came down to the final holes so did the battle for the individual title. Clemson freshman Doc Redman trailed the Cavaliers Bard until the 16th hole. The Cavalier senior All-American made his fourth bogey of the final day to allow Redman to pull even with two holes to play.

On the 17th hole the Clemson freshman caught a bad break. His tee shot split the fairway, but rolled into a deep divot. The ball almost looked like it was embedded making Redman’s second shot very difficult.

“It was a tough shot and I put it in the bunker next to the green,” Redman said. “I was on the down slope in the trap and the bunker shot just rolled off the green,” he said.

Bard was able to sink a 40 foot birdie putt on the hole to get back to even and when Redman was unable to convert his par putt the Virginia golfer had a two shot lead going to the final hole.

Redman’s second shot to the final hole found another bunker and forced him to take his second straight bogey. Bard rolled in a short par putt to wrap up the individual title, but while Redman’s finish was not what he was hoping for, the team victory made up for some of his disappointment.

“I’m happy the team got the win, that was more important than me winning. We are playing well and winning a third straight tournament is great,” said Redman who finished as the runner-up on the same course he was also a runner-up in last summer’s Palmetto Amateur.

Clemson coach Larry Penley helps freshman William Nottingham with some strategy in the final round.

Penley got a solid performance from another newcomer to the team.  Freshman William Nottingham opened the tournament with a 4-under par 66.

“We have some very talented players who are competing for the fifth spot and William took a big step forward in that competition. We are going home to rest up and get ready to play at Furman and we will see who can win that fifth spot,” said Penley.

South Carolina was the hottest team in the final round. The Gamecocks matched their first round 279 total with the same score in the last round. A disappointing 7-over par 287 in the second round put the Gamecocks a little too far back on the leader board to catch up with Clemson and Virginia.

“We started out great, but we had a stretch of six or seven holes in the second round that hurt us, we got Palmettoed,” said Bill McDonald the Gamecocks golf coach. “I was proud of how hard our kids played to get back in it, but we had a lot of ground to make up,” said the coach.

Gamecock junior Keenan Huskey shared the first round lead with two other golfers and finished in a tie for fourth place.

Keenan Huskey led the USC charge getting close to the individual lead with two holes to play. The Gamecock junior bogeyed those final two holes to drop into a tie for fourth place with Clemson’s Carson Young.

“I had a chance, but I made a couple of stupid mistakes,” said Huskey. “I played well in the first round, but I didn’t finish the second round the way I would have liked to play. If I played a little better it could have helped me today,” he added.

A third place finish for the Gamecocks was another step in the right direction for a very young team. McDonald’s lineup included Huskey along with two freshmen and two sophomores.

“We have used the season to get these young guys some experience and we can see it is helping them. I’m really proud of how hard they compete and I think they are only going to get better,” said McDonald.

The Gamecocks have a quick turn-around as they will play their second tournament this week when they tee it up at the General Hackler Championship at the Dunes Club in Myrtle Beach staring on March 11th.