Clemson’s streak is up to five

The Clemson Tigers claimed their fifth tournament title in a row with a win at their own Clemson Invitational. The Tigers finished 15 shots in front of Georgia Tech for their second straight win in the tournament played at The Cliffs at Keowee Falls.

The Tigers shot a final round 4-under par 284 to finish ahead of Georgia Tech while Alabama finished third in the 13 team tournament.

“We are playing solid and fundamentally sound and we are not making many mistakes,” said Clemson coach Larry Penley. “That is why we are winning,” he said.

Clemson was led by their two senior golfers. Carson Young, who won his first college tournament two weeks ago at Furman, shot a final round 1-under par 71 to claim second place. Young birdied two of his final three holes to be the tournament’s runner-up.

“We have some good team chemistry,” said Young. “I was proud of the guys. Five wins in a row is awesome,” he said.

Fellow senior Austin Langdale also shot a 1-under par 71. Langdale came within a putt on the final hole of tying Young for second place. Langdale’s 10 foot putt did a horseshoe around the cup and left Langdale in a three way tie for third with William Rainey from the College of Charleston and James Clark of Georgia Tech. 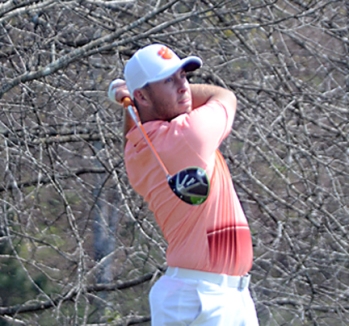 Austin Langdale was one of four Tigers to shoot 1 under par in the final round.

“We’ve won 6 of 9 tournaments and not a whole lot of people can say that,” said Langdale. “Hopefully we can keep it going,” he said.

Patrick Cover (center) of UNC Wilmington won the individual title and set a new course record at The Cliffs at Keowee Falls.
Cover was presented his winners trophy by head PGA professional Julian Bland and Brian Peeples the Director of Golf Operations for The Cliffs Clubs.

The individual title was won by Patrick Cover of UNC Wilmington. Cover set a course record with his final round 7-under par 65. The Seahawk junior notched the win by two shots after starting the final round in 16th place.

UNCW head coach Matt Clark walked the course with the winner and helped him set the new record. “Coach Clark and I did a great job of staying in the moment all day,” said Cover. “We took it one shot at a time and I was able to hit a lot of good shots today.,” he said.

SMU and the College of Charleston finished in fourth and fifth place.

In addition to the second and third place finish by Young and Langdale the Tigers placed two other players in the top-10. Freshman Doc Redman continued his impressive rookie year play shooting 1-under par with a tie for sixth place. Sophomore Bryson Nimmer finished at even par in a tie for eighth place.

“It is great to keep winning, but we know we can play better,” said Redman. “I think everyone on the team knows that even though we are playing good golf, we are going to have to play even better in the ACC and the post season,” said the Tiger freshman.

Penley agrees with Redman. “We have a lot of frustrated golfers. They are mostly frustrated with their putters because they know they can play better. We shot four 71s on a difficult golf coursein the last round which was the low round of the day. Everyone on the team knows how good we can be,” said the coach. 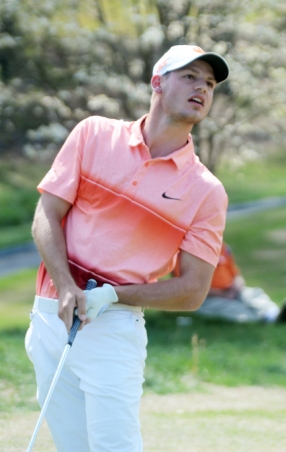 The Tigers also got top-20 performances from a pair of players who competed as individual entrants. Josh Fickes finished in a tie for 11th place while Peter Math1son tied for 14th place.

Clemson will play one more regular season tournament this weekend at North Carolina State and then will compete in the ACC Tournament being held this year at Musgrove Mill in Clinton.

“Everyone knows what is ahead and how much better we can be, but that is exciting. They haven’t seen our best golf yet, but its coming concluded the Clemson coach.