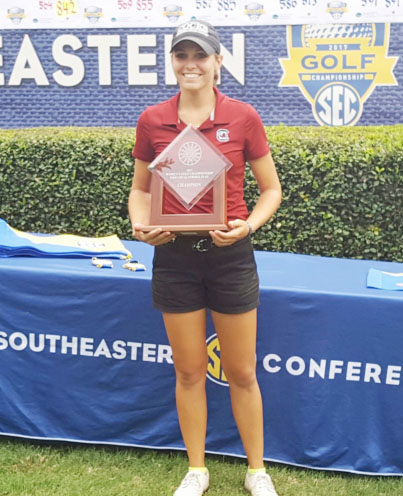 Katelyn Dambaugh set the 54 hole scoring record on her way to the SEC Women’s championship. (photo from SEC)

Katelyn Dambaugh set a 54 hole scoring record on her way to winning the SEC Women’s individual championship. Dambaugh came from two strokes off the lead with a final round 6-under par 66 to win the title by a shot.

“This is the best feeling, EVER,” said the new SEC champion with great enthusiasm. ““I have been so close recently, and I love coming here. Being able to win at one of my favorite golf courses is pretty special,” said the USC senior who won the title at the Graystone Golf and Country Club in Birmingham.

The win was Dambaugh’s second victory and both have come in the post season. Last year the Gamecock golfer from Goose Creek won the Baton Rouge Regional.

“I just went out and played and tried to have fun. Coach (Kalen Anderson) said if we had fun we would do some special things and we did,” said Dambaugh.

The 6-under par 66 came within inches of being one stroke better. On the eighth hole Dambaugh just missed a hole-in-one.

“It just lipped out for a hole-in-one. I hit it really good and new it was going to be good. It was a fun shot,” she said.

Dambaugh and the USC team will get their NCAA Regional assignment on April 27th. NCAA Regionals will be played at four sites starting on May 8th.

“This gives my confidence a boost. I am going to do the same thing, practice the same way and keep doing what are doing,” concluded Dambaugh.