“This was the first Super-Senior tournament I have played,” said Cobb who recently turned 65. “It’s always fun to win especially when you have that many great players in a tournament,” he said.

Cobb opened the  36 hole event at the Florence Country Club without the benefit of a practice round.

“I had played nine holes at Florence several months ago, but the first time I saw most of the course was in the first round,” said Cobb.

His opening round 1-over par 72 was good enough to share the lead with Hackler.

“I made three 2s in the round. It was the first time I have ever done that. I was fortunate my short game was working because all of these guys where booming their drives well past mine,” he said.

In the final round Hackler was able to take a one shot lead at the turn, but steady play and a birdie on number 14 gave Cobb a 2-shot lead with four holes to play. 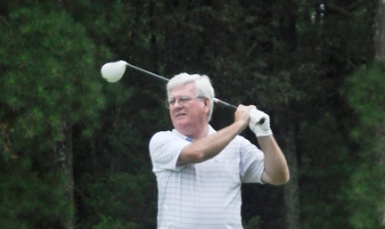 Hackler cut the lead to one shot going to the final hole and appeared to be in position to force a playoff. He needed an 8-foot birdie putt to tie Cobb.

“I had a 10 footer for birdie and it lipped out. He didn’t make his putt either and I was very fortunate to come away with the win,” said Cobb.

Keeping the ball in the fairway is always a key to a good score, but Cobb believed it was even more important at Florence.

“The course was in great condition, but the rough was brutal. If you got in the rough you had trouble making pars. I was fortunate to have stayed out of it most of the tournament,” he said.

While this was Cobb’s first statewide individual win he has been on several winning Trescott teams and holds more than a handful of local victories in Upstate events.

“I love the guys I play with because we have a good group and its fun, but it was great to have a chance to play in a tournament where everybody can really play,” he said.

The Legends championship (over 70) was won by Mike Weiner  of Kiawah Island.