When it comes time for Carolina to play Clemson everyone takes a side. At Woodfin Ridge the annual Clemson versus Carolina golf tournament included a brother versus brother contest within the event.

Cam Fant was the captain of the Carolina team and his brother Chris led the Clemson squad. The Tigers were trying for their fourth win in a row and Cam Fant was determined not to let it happen.

“I really got tired of seeing that Tiger Paw flag flying over the clubhouse every time I pulled in the parking lot,” said the Gamecock captain. “I know everyone else on our team felt the same way and we were ready,” he said.

The tournament uses a simple points system for scoring. Two-man teams play match play with the winning team getting a point. If the match ends tied it is a half point for each.

Chris Fant is a Clemson grad who has been a Tiger fan most of his life. Cam Fant became a Gamecock fan when Steve Spurrier came to Carolina.

“I was always a Spurrier fan when he was at Florida. I got to meet him a few times when I was working on the Carolina Walk condo project next to the stadium. I became a Gamecock fan because of Spurrier,” he said.

After suffering through three straight losing tournaments Fant thought it took more than good play on the golf course to win.

“I thought a part of the victory was getting the right match-ups of players. We didn’t get beat on that this year,” he said.

Fant sent his heavy hitters out early in the round and they did what he hopped as they brought in the points.

The winners also celebrated with a steak dinner, while the losers made do with beans and cornbread.

“I was one of the last ones to finish so I didn’t know if we had won, but when we got to the parking lot I started to see a lot of the Clemson golfers leaving early. They would have stuck around if they won,” joked Fant.

While the Captain guided his team to a win, he was not able to do the same in his match with his brother. Chris Fant and Chris Callahan beat Cam Fant and Trey Lowe in their head to head match.

Fant is convinced the win by his Gamecock golfers is a positive sign for the big game on Saturday.”In the last few years whoever has won here gets a win in the game, so I am predicting an upset. I got a feeling we are going to put one on Clemson,” concluded the winning Gamecock captain. 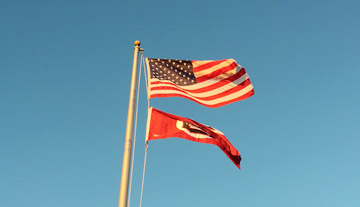 The series is now tied at seven wins for each school.