The Blade celebrates its 20th anniversary 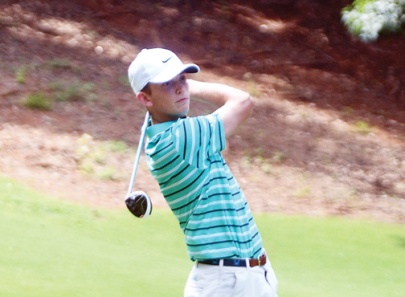 Jacob Bridgeman won the 2017 boys championship at The Blade at Thornblade Club.

When The Blade Junior tournament began 20 years ago it set a very high goal, to be the best junior event in South Carolina.

A cooperative effort between the South Carolina Golf Association and the members at Thornblade Club, with the support of Jay Haas have allowed the tournament to live up to its goal.

It is now the most popular junior championship in the state and is the tournament every young golfer wants to play.

The Blade is so popular that just making the field is as competitive as actually playing in the championship.

“We wanted to expand our junior opportunities and asked Thornblade to hold this special event,” said Happ Lathrop, the former Executive Director of the South Carolina Golf Association. “The club was so supportive and they took off and ran with the idea,” he said.

In 1999 there were not as many high level junior events for young golfers to play as there are today. The SCGA Junior championships and a handful of other events around the state highlighted the opportunity’s for competitive golfers.

“We wanted to have an event for South Carolina kids that was as good as any AJGA or other national event,” said Jamie Michala, who was the head golf professional at the club in 1999. “The idea was to have a great event here in the state for in-state golfers so they would not have to travel,” she added.

Easley’s Justin Keith won the first Blade Championship in 1999. He repeated as champion the following year.

Junior golfers were excited about the new tournament, but did not have a good idea of what it was or would be in the future.

“We didn’t  know much about it, but we knew it was on a great golf course and Jay Haas was involved,” said the tournament’s first champion Justin Keith.

Keith was one of the top golfers on an Easley High School team that challenged for the AAAA state high school championship.

“I played with Jay Haas Jr in my group. There were so many players that I had seen in high school tournaments or state tournaments, but had not seen them all in one tournament,” said Keith.

The first champion opened the tournament with a 6 under par 65 to take the lead. He shot a second round even par 71 to hold off the field and claim the victory.

Keith also won the second tournament for back to back victories. Time has blurred some of the memories from the first and second year into one recollection, but two things are clear to him. 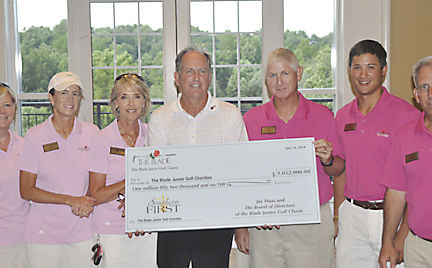 The Blade reached the $1 million mark in donations in 2014 and continues to provide funds for local charities. Jay Haas and tournament volunteers made the presentation.

“I know the first round was the best golf I ever played in my life. I hit the ball great and everything went in the hole,” he said.

His second memory of the first tournament was just as important to him and to the future of the event.

“I had never experienced any tournament like The Blade. I didn’t know what a professional event was like, but I thought it could not have been better than The Blade. The people involved, the tournament, the hospitality and the staging was first class,” said Keith.

The tournament added a Junior Am tournament to raise funds and with the help of Haas has contributed over a million dollars to local charities.

“Much of what we have done over the years was inspired by Jay and Jan Haas,” said tournament chairman Rob Reeves. “Kids helping Kids has become a big part of the tournament and made The Blade unique,” he said.

Reeves has been the chairman since the tournament began. The consistency of the leadership has helped keep the tournament as a high quality special event.

“So much of what The Blade has become is due to the vision of Rob and it is his influence that keeps it a great event,” said Michala.

The Thornblade Club members are the majority of the volunteers for the tournament. A group of 50 club members have become regulars in operating the event and seem to find new helpers to join the ranks every year.

“We could not do this without the full support of the club. Not only do they help run the tournament they give up their course to allow the juniors to have this great experience,” said Reeves.

Many Blade winners have gone on to have successful college careers. Reona Hirai of Summerville won the girls title in 2013. Last spring she won the SoCon individual championship playing for Furman.

Since it opened, the Thornblade Club has been involved in community events and support for the growth of the game.

Each spring Thornblade is the host for the BMW Web.com Tour tournament.

“Our club has always been active in supporting golf in the area and the state,” said Thornblade General Manager Tim Mervosh. “We enjoy having these young golfers with us as they have the chance to enjoy playing a great golf course in an important championship,” he said.

After playing golf at the College of Charleston Keith worked at the Ocean Course. He was there when the course hosted a special preview day before the 2007 PGA Senior championship.

Haas won the championship the year before at Oak Tree and was on hand to promote the big event at the Kiawah Island course.

Recently the first champion played Thornblade with some friends. He accepted some good-natured kidding when they saw his name on The Blade plaque in the clubhouse.

“We played some up tees and I shot a 76 which I thought was pretty good for a twice a month golfer. It did bring back some memories,” he said.

This year’s event begins with the Junior Am on Monday, July 16th. The 36 hole tournament will be played on Tuesday July 17th and Wednesday July 18th.

Fans are welcomed to come to Thornblade to see the best young golfers in South Carolina. Additional tournament information and tees time are available at http://www.thebladejrgolf.com