Clemson earned their place in the final after defeating Ohio State in the first round of the tournament.

Kyle Cottam wrapped up the win for the Tigers when he halved his final match against Duke’s Qi wen Wong.

With victories from Colby Patton, Turk Pettit and Zack Gordon already on the board, Cottam only needed a tie to give the Tigers the victory.

“It was a great match,” said Clemson coach Larry Penley. “It came down to a 30 foot putt by Zach Gordon on the 17th hole to win his match and a par on 17 by Kyle Cottam to clinch a tie in his match,” said the coach.

Last year the Tigers shared the tournament title with Georgia Tech when the final round was washed out by rain earlier in the event. 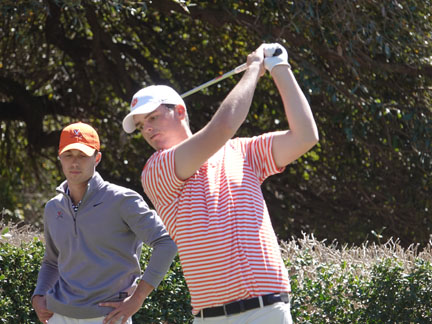 The 17th hole was pivotal in the finals matches. In addition to Gordon winning his match on the hole Colby Patton got the Tigers started with a win over the Blue Devils Evan Katz.

The junior from Knoxville finally broke into the lead on the 17th hole. Cottam closed out the win by finishing in a tie with Wong.

“It was a great experience to play on this great course and to get experience playing match play competition,” said Penley.

The first round format included alternate shot and best ball matches against the Buckeyes. Bridgeman and Patton teamed up to get one of the Tigers wins.

The Tigers will return to action on October 18th when the travel to Alpharetta, Georgia to play in the Golf Club of Georgia Intercollegiate.