Hot round wins Frostbite at Boscobel

The team of Whitt Jefferson, John Carter and Josh Branyon made 25 birdies in two rounds to win the Frostbite at Boscobel. (GolfClub photo)

The largest field in recent memory shook off  some winter rust and posted impressive scores at the Frostbite three-man tournament at Boscobel.

Individual members of the Biershenk family from Spartanburg have had success at events played at the golf club in Pendleton. This year three of the four golfing members of the family joined forces to take the lead after the first round.

Tommy Sr, Robbie and Nick Biershenk teamed up to shoot a 14 under par 71. What would end up being the best round of the tournament earned the team a one shot lead over the field in the captain’s choice format.

Robbie Biershenk helped his father and brother take the first round lead at the Frostbite at Boscobel. (GolfClub photo)

The team of Thornblade club professional Jon Hines, CGA Senior champion Todd Hendley and former Clemson golfer Crawford Reeves carded a 13-under par 58 and was only one shot in front of four other teams.

One of the teams in that four-way tie for second included a pair of pros. John Carter and Whitt Jefferson the head pro and assistant respectively at Burlingame Country Club in Saphire, North Carolina made the drive down from the mountains to play in the tournament.

“Our club is closed between October and May and this isn’t too far to come to be able to play golf,” said Carter. 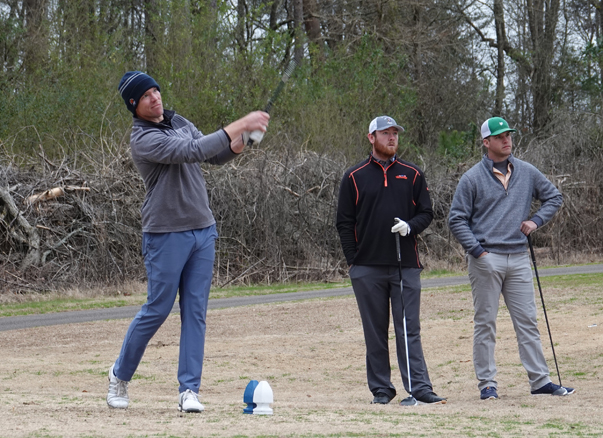 The team of Robert Lutomski, Weston Bell and Matt Carter finished in a tie for third place. (GolfClub photo)

The two were joined by former SCGA Mid-Am champion Josh Branyon. The three golfers played the first round bogey free and like the other two teams tied for second expected to challenge the leaders in the final round.

“We thought if we could match our first round score we would be in it,” said Jefferson. “Anything could happen and another 59 would at least keep us close,” he said.

In the second round Carter, Jefferson and Branyon improved on their first round score by a single shot. As one of the earlier finishers the three golfers had to wait for the leaders to finish before they could find out if their 13-under par 58 would be good enough for the win.

“We played unremarkable golf,” said  Branyon. “We had a lot of short putts and we made them all,” he said.

For the second day in a row the team played bogey free golf.

“We made 25 birdies in the two rounds. It was a collective team effort,” said Jefferson.

The two day total of 59 and 58 gave the winners a 117 total and a one shot victory for Branyon, Carter and Jefferson in the first big Upstate tournament of the new year.

The team of Dallas Odom, Justin Whelchel and Colby Green broke out of the tie at forth place by shooting their second straight 12-under par 59 for a two-day total of 118.

First round leaders, Tommy, Sr. Robbie and Nick Biershenk posted a respectable 9-under par 62. It dropped the team from first into a tie for third place.

Weston Bell, Robert Lutomski and Matt Carter shot a final round 11-under par 60 to tie the Biershenks for third place.

Boscobel replaced its greens since last fall. In addition the club reshaped a number of greens to make them fairer for golfers. (GolfClub) photo

The tournament was the first opportunity for golfers to test out the dozen remodeled greens and the new T1 putting surface in competition.

“We have had good reviews from golfer on the change,” said Job Gunenther, one of the club’s managers. “In addition to the greens and new putting surface we took out a lot of trees. Our senior groups like that,  but it is also vital to get enough air and sun to the new greens,” he added.

Most times when clubs undertake a large project some members will leave. Gunenther says just the oposite happened at ‘The Bell’.

“We had decided on a limit to the number new members we could bring in and we got a lot more than we expected. The new members liked what they saw we were doing and wanted to be a part of things here,”said Gunenther.