When Todd White steps up to the first tee at the Orangeburg Country Club in the finals of the Carolina Golf Association’s South Carolina Match Play Championship he will be facing a golfer who wasn’t yet born the first time he won the championship.

College of Charleston’s rising senior Logan Sowell will take on the 52 year old amateur from Spartanburg in the final starting early Sunday morning.

“Luckily for me, the golf clubs and the golf ball have no earthly idea how old I am,” joked White, who earned medalist honors five-times since 1988.

Sowell won medalist honors in this year’s qualifying tournament to earn the top seed while White made it to match play bracket tied for the final spot.

The qualifying medalist from Kershaw earned his spot in the finals with two solid wins before being pressed to the final hole in his match with defending SCGA Amateur champion Tyler Gray from Lugoff.

Sowell birdied the final hole to advance to face Greenville’s Harry Reynolds. He defeated the Furman golfer 3&1 to set up his match with White.

White’s run to the finals included three comfortable wins before being stretched to the 17th hole in his semi-final match. White claimed a 2&1 victory over Wofford College golfer Henry Augenstein from Columbia for his spot in the finals. 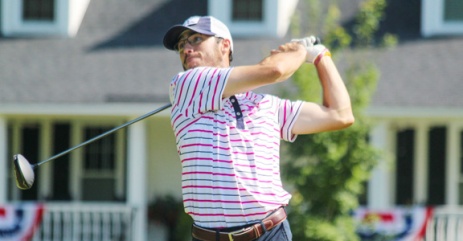 After two runner-up finishes in a row Kershaw’s Logan Sowell will try to win his first Match Play title on Sunday. (CGA Photo)

“I jumped out to an early lead and held on,” White said. “Believe it or not, fatigue was setting in for this 52 year old man coming down the stretch. I hit a great shot in to No. 17 and was able to finish it off,” he added.

Both golfers have experience playing in the finals. White has been in five finals winning in 1991,2004 and 2010. Sowell has been the runner-up in the last two championships and hopes this year will produce a different result.

“It’s the same mindset for me as it has been all week,” Sowell said. “Have fun with it, play my game, and hopefully the outcome will be a little bit different than it has been the last couple of years. I feel very confident that things will work out,” he said.

White, a 2013 member of the Walker Cup team believes the key to winning his fourth championship in the event starts on the tee.

“The most important shot on every hole is the tee shot. If I can put the ball in play, I can be aggressive from there. Hopefully I can jump out and put a little bit of pressure on the opponent, but if not, I’ve been here before,” said White.

Live scoring is available on the CGA website at https://www.golfgenius.com/pages/2553082

The CGA contributed to this story.