Two years ago, at about this time, not many people outside of Hilton Head Island knew much about a talented junior named Jonathan Griz.

Then in the span of three weeks he served notice that the 14 year old golfer was something special.

First he topped one of the best fields in state junior play with a win at The Orange Jacket in Pickens. He became the youngest champion of a tournament that has been the scene of early wins for future college All-Americans and several PGA Tour pros.

A couple of weeks later the Alabama commit beat a field including many of the best juniors in the country when he rallied in the final round to win the highly regarded Bobby Chapman Junior at The Country Club of Spartanburg. 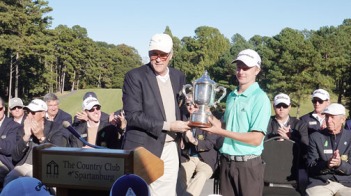 Griz came from 6-shots off the lead in the final round to win the prestigious Bobby Chapman Junior.  (GolfClub Photo)

After exploding on the scene at the end of 2018, Griz was named the CGA and SCGA Junior Player of the Year.

In 2019 Griz played well and won the Nike Junior Invitational. He and his future Alabama teammate, Nick Dunlap, combined to win the Carolinas Four-Ball championship at Camden.

Those two wins and some other good tournaments would be considered a very good year by most, but Griz was disappointed with his play during the year.

“I struggled in a few events, I didn’t play to the level I should have been playing,” said Griz. “I had to get past some mental errors that kept me from playing the way I wanted to play,” he said.

It was difficult at the time, but looking back he learned some important lessons.

“I got to play in some really big events for the first time and at the moment it was a nightmare. There were some things I learned last year that are helping me to play well this year,” he offered

In July he won the North & South Junior Amateur title at Pinehurst playing on the legendary Pinehurst #2 course.

And this past weekend he put his name in the South Carolina Golf Association’s record book at the state amateur as the youngest winner ever.

The first two rounds of the championship were plagued by bad weather.

Griz completed his first round and had the lead in the clubhouse when the round was delayed and then suspended because of weather .

“I had a good feeling all week. I knew I was playing against the best players in the state, but I knew I put in the work and could compete,” he said.

When all the golfers had finished their first round the next morning, Griz was tied at the top by Ryan Reynolds from Camden at 4-under par.

Weather chased golfers off the course again on Friday and forced the second round to be completed on Saturday morning.

Griz shot a 1-under 71, but before bad weather suspended play he was at 5-under par for the round. 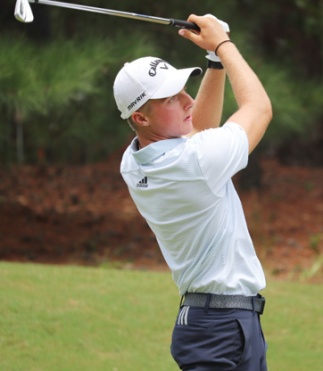 Griz started the final round 3 shots behind the leader. He birdied and eagled two of his first three holes to tie for the lead. (SCGA Photo)

As the weather worsened so did Griz’s score. He bogeyed four of his last five holes in the round and was passed by Evans Lewis for the lead.

“I had been playing well, got to 9-under and when I came back the next day it was just awful. I was glad it was over,” he said.

Lewis, a North Greenville University golfer, shot the best round of the tournament. His 7-under par 65 gave him the lead at the half way point.

Before Griz started his third round he and his father had a long talk. It helped him get over his poor finish.

“Dad helped me get my head back in the game. I learned from those last six holes to make sure it didn’t happen again,” he said.

With Griz dropping back, Gray battled Christian Salazar for most of the third round before finishing a shot in front of the Sumter golfer.  Griz tied for third with Barnwell’s Kyle Bearden after shooting a 4-under par.

“Looking back, I think the back nine in the third round helped me reset for the rest of the tournament. I made 7-birdies on the back,” said Griz.

In the final round Griz didn’t waste any time running down the leader.  He birdied his second hole and eagled the third to pull even with Gray.

He gave a shot back with a bogey on number 7 and made the turn one stroke behind the defending champion.

Gray suffered back to back bogeys on number 11 and 12 while Griz eagled the 12th hole to take a 3-shot lead over Gray.

“I hit one of the best shots ever to get to 3 feet for the eagle, but I made a sloppy bogey on 13. I think I got too comfortable. I was annoyed with the bogey and I knew I had to play better on the next hole,” he said.

Jonathan Griz celebrates his victory in the SC Amateur. Griz, at age 16, is the youngest golfer to win the championship. (SCGA Photo)

With Gray now behind him, Griz had one more challenge for the lead. Salzer eagled the 15th hole to get to 13 under par.

“He made a great put for the eagle and I knew I had to make my 15 footer for a birdie,” said Griz.

He answered the eagle by sinking his birdie putt and then made three straight pars to claim the win.

“After making that putt on 18. I remember coming off the green and giving my dad a big bear hug. I’m always going to remember everything about that round,” he recalled.

Second round leader Lewis finished in fifth place while 2019 SCGA Hall of Fame inductee Todd White from Spartanburg battled his way up to a sixth place finish shooting a 3-under par 69 in the final round.

The win by the 16 year old Griz bettered the record of a 17 year old Jack Lewis who won the amateur title in 1964 to begin what would be an SCGA Hall of Fame career.

“I honestly felt comfortable. I put my trust in God and the hard work I had done to get ready. I stayed focused and played golf the way I knew I could play. When I look at the names on the trophy, I know this is the biggest win I’ve had. I’m proud to have my name with those great players,” concluded the 2020 SC Amateur champion.

Competitors who finished at 4-over par (top-20 and ties) are exempt into the 2021 state amateur.

Complete scores are available at https://www.golfgenius.com/pages/2495464