The AAAA tournament at Furman had weather problems and was not able to complete the 36 holes scheduled for Monday. The tournament has been reduced to 36 holes with the second round set to begin Tuesday morning with tee times starting at 8 AM. 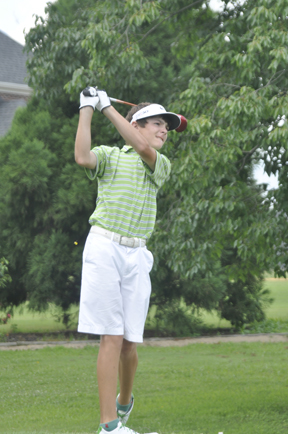 The defending champions from Boiling Springs and the Easley Green Wave were tied after the first round of play at the Kiwanis Club AAAA Championship being played at Furman.

Each team shot opening rounds of 303.

Individually defending state champion Trent Phillips of Boiling Springs shares the first round lead with Christian Woods of Summerville. Both golfers shot 3-under par rounds of 69.

Easley’s Matt Carter is at 71, Gaffney’s Seth Taylor is at 72 and Lexington’s Lauren Stephenson is at 73, so is Alec Weary of Bluffton, from Byrnes Jonathan Costello and Reed Bentley,

The second 18 holes was scheduled to played immediately after the conclusion of the first round, but weather cancelled the round.

A final round will be played starting on Tuesday morning at 8 AM.

AAA FIRST ROUND RESULTS FROM THE HACKLER COURSE IN CONWAY 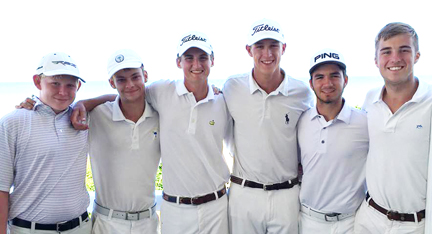 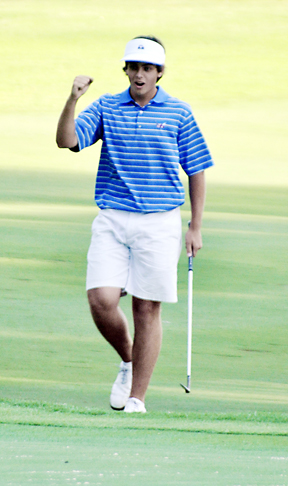 Coleman Self of Emerald has the first round lead at the AAA State Championship. (file photo from The Golf Club)

Coleman Self of Emerald in Greenwood is the individual leader after posting a 2-under par round of 70. 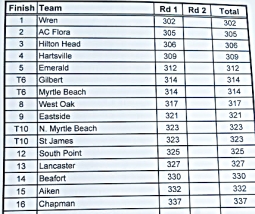 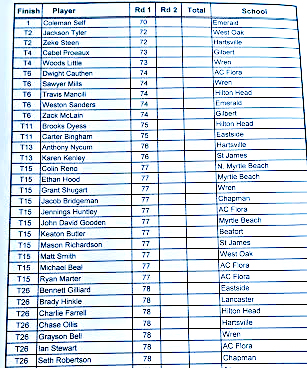 CHRIST CHURCH LEADS AT CLASS A

St Joseph’s of Greenville is in second place with a very solid 310 total. While Ware Shoals is in third place and Southside Christian is in fourth place.

Cavalier golfers Jackson Weede has the individual lead at 71, teammate Pierce Fox is tied for second with St. Joe’s Christian Balliker, CC’s Alex Mahaffey is fourth at 73. Michael McKee of Ware Shoals is fifth at 74.

Bishop England shot an opening round 304 to take a big lead over Waccamaw at the Class AA tournament at Charleston National Golf Club. Pendleton and Andrew Jackson are tied for third at 327. Ninety Six is fifth at 330.

Jamie Wilson posted a 3-under 69 for the first round lead with James May in second pace at 73 and Logan Sowell in third at 74.