The South Carolina Gamecocks won their fourth tournament of the year with a victory at Bulls Bay.

The South Carolina Gamecocks will ride into the SEC Championship after riding the bull at Bulls Bay. USC won their fourth tournament of the year and third this spring with a convincing victory in the Hootie @Bulls Bay Intercollegiate. 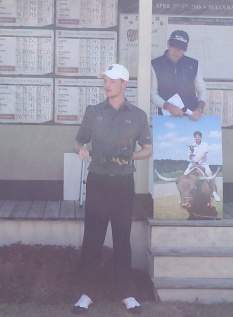 Sophomore Keenan Huskey claimed his second victory of the year with an 11-under par 205 total to take medalist honors by 6 shots.

South Carolina came on strong after the first round to take command of the event. It was the second win in a row in the tournament played at the course just north of Charleston.

The Gamecocks started the tournament with an 11-under par total, but trailed Charleston Southern by four strokes.

Sophomore Keenan Huskey shot a first round 7-under par 65 to be in a tie for second place. The Greenville golfer was tied with Matt Gilchrest of Auburn and trailed Taylor Zoller of Charleston Southern by one shot.

In the second round the Gamecocks shot a 4-under par 284 total and expanded their lead over second place Wake Forest by 8 shots.

Huskey followed up his career best 65 with a solid 1-under par 71 to remain tied with Gilchrest, but this time for the lead after 36 holes.

In the final round the Gamecocks shot 14-under par to win the tournament by 15 shots with a 54 hole total of 23-under par. Huskey broke away from Gilchrest with a final round 3-under par 69.

“I was just in control of my game the entire week,” Huskey said. “I think we’re all peaking at the right time. It’s pretty exciting to see what we can do in the postseason,” he said.

Freshman Scott Stevens finished at 2-under par to tie for sixth place. Matt NeSmith, Will Starke and Sean Kelly all tied for tenth.

“This was a tremendous team effort and I couldn’t be happier it was just an incredible win,” said USC golf coach Bill McDonald. “This was the second time this year we had all five of our guys finish in the top-ten,” he said.

However, it was Huskey’s play that got the biggest pat on the back from the USC coach. 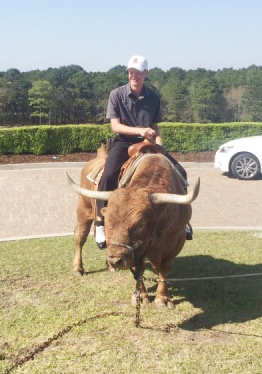 The winner traditionally rides the bull to celebrate the victory as Huskey did after he won.

“His 7-under par round on Sunday really got us going. He won the South Carolina Amateur by nine shots, he has shown when he gets on a hot streak he can play lights out,” said McDonald.

The Gamecocks next will play in the SEC Championship. Senior Matt NeSmith will be attempting to defend the individual title he won last year. The Gamecock coach is looking forward to the tournament.

“The most important thing is winning breeds more confidence in the team. These guys have shown that leading in the final round they can close the deal and that makes things exciting for the SEC,” concluded McDonald.