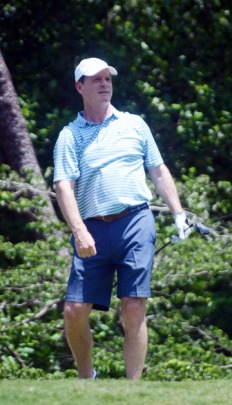 Rick Cloninger watches his shot on the final hole at the Chanticleer National Senior Invitational.

This time Rick Cloninger only put one ball in the water on the 18th hole in the final round of the Chanticleer National Senior Invitational.

The last time he won the tournament played at the Greenville Country Club’s Chanticleer course he dunked two balls on the final hole and still earned the title in 2013.

“I was thinking about how I almost lost it three years ago,” said the two-time champion. “I took more club than I thought I needed. It felt right when I hit it. I wasn’t concerned about it until it landed,” said Cloninger.

The ball landed a few feet short of the green with a splash and Cloninger didn’t expect any miracle finish this time, but there was another one in his bag. 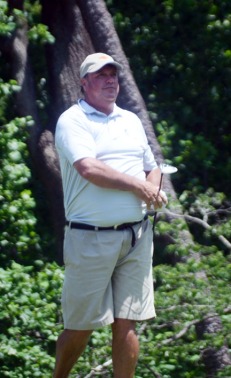 Roy Hunter of Pawleys Island had the second round lead. He entered the final day with a four shot lead over Pat Thompson of Asheville and a 7 shot lead over Cloninger.

However, Hunter struggled on the front nine. He made two double bogeys and lost his entire seven shot lead over Cloninger. At the same time Thompson was unable to take advantage of the leaders problems as he posted a 5-over 41 on the front nine.

The Fort Mill golfer finished the first nine holes at 1-under par and was even with Hunter to start the back nine.

“It was back and forth the rest of the way. I didn’t think I was playing poorly, but a couple of shots that I thought were great just came up a little short,” said Cloninger.

On the fourteenth hole Hunter drained a bomb. His ball was off the green in the fringe more than 30-feet from the pin. He rolled in the putt and with Cloninger’s bogey he had a 2 shot lead with four hole to play.

The 2015 SCGA Senior Player of the Year bounced back with a birdie on the fifteenth hole, but then gave it right back with a bogey on number sixteen.

In the six year history of the Senior Invitational the seventeenth hole has played a major role in deciding the winner.

Hunter missed the green with his second shot on 17 and found the creek. He scrambled back to save a bogey, but Cloninger was able to convert his 15 foot birdie putt to get even with Hunter again.

Playing first, Cloninger had to wrestle with the demons from the last time he was in the exact same position and he had the same feelings when his shot went in the water.

“I had a sinking feeling. I know Roy is sitting there. He just needs to hit it on the green and two put and it is over. Unfortunately he didn’t get it up there,” said Cloninger.

“Golf is hard,” he said. “I didn’t have any place to go so I had to chip out of the bunker. In the fairway I used a longer club to make sure I cleared the water. The ball was sitting up a bit and it rode up the club face,” said Hunter.

Hunter needed to make another 30 foot put to have a chance to force a playoff. His putt missed setting up Cloninger for the win with a two-put double bogey.

The 2013 champion was able to lag his ball within a few inches of the hole and tap in for the win. He actually improved his score on the final hole from the last time he won. He went from an eight then to a six this year.

Don Marsh won the Super-Senior Championship in a playoff with Neil Spitainy.

“The golf course stands the test of great players. The reputation of the tournament continues to grow and that means getting more and more top players in here. That is what is going to make winning here even more special in the years to come,” concluded the champion.