Kennedy Swann of Austin, TX will enroll at Clemson in time to play in the spring.

The Clemson Tigers added five new recruits to their golf rosters on the first day of the early National Letter of Intent signing period. Larry Penley and Kelley Hester have added outstanding young talent to join their teams at Clemson.

Hester will be able to insert one of her recruits into the lineup this spring. Kennedy Swann of Austin, Texas signed to play at Clemson. Swann will enroll for the spring semester and be eligible to play for the Tigers when the season resumes in February. 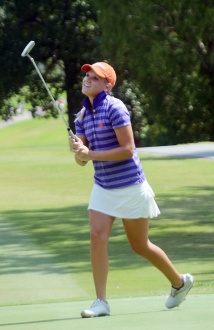 Callista Rice from Mars Hill is a two-time winner of the Dogwood State Junior.

Callista Rice of Mars Hill will join the Tigers next fall. Rice is a senior at North Buncombe High School. Among her accomplishments are a pair of victories in the Dogwood State Junior championship. She was the runner-up at the Vicki DiSantis Junior and finished third at the AJGA Ez-Go Vaughn Taylor Championship.

Rice has been the dominant golfer in her region  and finished fifth in the 3A state championship. She also has a win and a number of high finishes on the PKB Junior Tour.

Colby Patton is a second generation Tiger. His father Chris played at Clemson and won the 1989 US Amateur.

Larry Penley helped coach Chris Patton to a US Amateur Championship in 1989 when he was a Clemson golfer. Now he will have the opportunity to coach his son. Colby Patton signed to play college golf at Clemson just like his father.

Patton played high school golf for Hillcrest High School in Simpsonville. After a solid junior season he elevated his game as a senior to be a contender in several major state tournaments.

Patton won his Region Championship and was the medalist at the Upper State AAAA boys tournament. His best finish in a major event was as the runner-up in the South Carolina Junior Golf Association championship. He also qualified for the USGA Junior championship this past summer.

The Tigers inked two golfers from out of South Carolina. Turk Pettit of Auburn, Alabama and Kyle Cottam of Knoxville will also bring outstanding junior experience to the Tiger program next year.

Pettit won the Alabama Amateur Championship this past summer. He also earned the title at the Future Masters played in Dothan, Alabama.

Pettit is a three sport star at Lee Scott Academy in Auburn. He is a quarterback on the football team and also is a member of the schools basketball team.

Cottam comes to Clemson from Knoxville Catholic High School. He won the 5AA Region State Championship and was the Tournament MVP at the Tennessee Junior Cup competition.

Clemson loses a pair of seniors after this season as Austin Langdale and Carson Young will graduate.