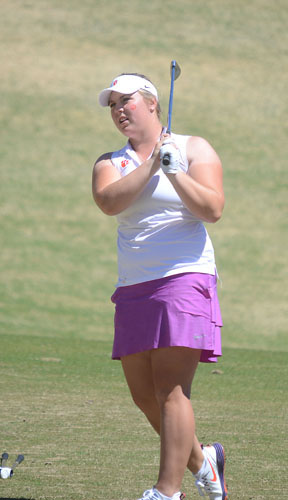 Clemson’s Alice Hewson is tied for second at the Athens Regional. (file photo)

The first round of NCAA Regional play was a mixed bag for the three Palmetto State teams hoping to advance to the NCAA Women’s Finals.

Clemson’s Alice Hewson had the best individual performance by a golfer from South Carolina. Hewson shot a 3-under par 69 at the Athens, GA. Regional to be in a three way tie for second place.

One of the golfers tied with Hewson is her former teammate Lauren Stephenson who transferred from Clemson to Alabama last year.

The Tigers as a team are in a tie for 11th place at 16 over par. Michigan State has the lead at the Regional being played on the University of Georgia golf course.

The Spartans finished the first round at 4-under par with Alabama in second place at 1-over par. 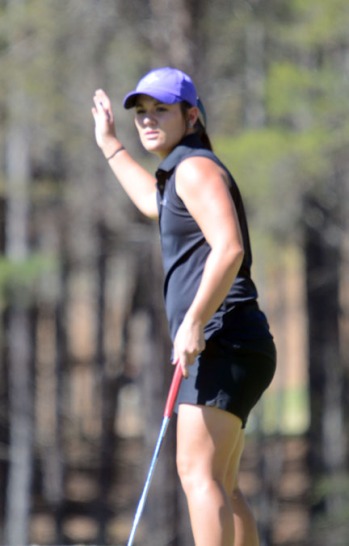 Haylee Harford has the best score for the Lady Paladins at the Lubbock, TX Regional. (file photo)

The Furman Lady Paladins entered Regional play ranked among the top-ten teams in the country. Furman, playing in arguably the toughest region ended the first day in a tie for eighth place.

Arizona St has the team lead at 5-over par. The Lady Paladins are 7-shots back at 12-over par entering the second round.

Furman was led by All-SoCon golfer Haylee Harford who shot an even par 72. Harford is tied for seventh place. Lila Vu of UCLA has the individual lead at 4-under par.

South Carolina is tied for sixth place at the Columbus, Ohio Regional. The Gamecocks shot a 21-over par team total to trail SEC rival Florida by 12 shots going into the second round.

USC’s Ainhoe Olarra and Ana Pelaez both shot rounds of 4-over par 76. Marta Martin Garcia has the individual lead at 2-under par.

The top six teams in each regional will advance to the NCAA Finals.

Live scoring for each regional is available at http://www.golfstat.com.