You don’t have to finish first in a golf tournament to win something. Players and teams can take smaller victories away from a championship.

The three Palmetto State teams in the NCAA Finals did not advance to the match play round, but each can take something from their play by reaching deep into the post season. 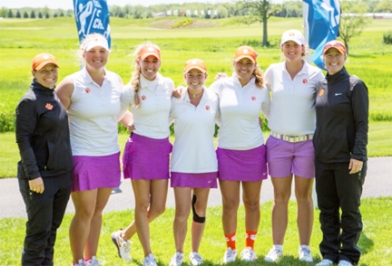 Clemson made the NCAA Finals for the first time in school history and finished 20th.

The Clemson Tigers were making their first appearance in the NCAA finals after surprising some experts by qualifying out of the Athens, Georgia Regional.

First year Clemson coach Kelley Hester joined her team in making history. Hester is the first coach to bring four different teams to the NCAA Finals. Previously she had coached UNLV, Georgia and Furman to play in the finals.

The Tigers were the second lowest ranked team making the trip to Rich Harvest Farms near Chicago. The team finished in a tie for 20th place with FSU a team that finished in front of the Tigers a few weeks ago at the ACC Championship.

“If you would have told me at the beginning of the season that we were going to finish 20th at the NCAA National Tournament I would have taken that,” said Hester. “We have everyone that played in this tournament back next year,  and I am excited about the future of the program,” she added. 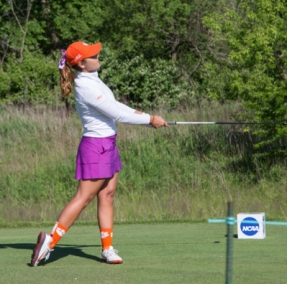 Freshman Ana Paula Valdes was the top Tiger finisher at the NCAA finals.

The top Tiger performer in the tournament was freshman Ana Paula Valdes. The first year Tiger finished in a tie for 59th place at 17 over par.

The Tigers return Valdes, Alice Hewson, Sydney Legacy, Marisa Messana and Kennedy Swann. Ashley Czarnecki joined the team in the spring and Clemson will welcome Calista Rice as a new recruit for next year.

Only senior Jessica Hoang will graduate from the program.

“This season was a great learning experience for a young team,” said Hester,

The Furman Lady Paladins entered the tournament as the highest ranked team from South Carolina. Furman was ranked ninth in the final regular season poll.

The highlight for the Lady Paladins was the eighth place finish for Haylee Harford. The Furman sophomore from Ohio shot a final round 1-under par 71 to earn a top-10 finish.

The Lady Paladins as a team were tied for 12th place. Furman finished in front of top-ten teams from Alabama, Duke and Florida State. The smallest school in the field improved its score in the final two rounds.

The Lady Paladins bak at their hotel wath the final holes of the championship on television with LPGA Hall of Fame golfer Betsy King. (Furman Twitter)

Furman took two freshman and a sophomore to the championship. While Harford played in the final last year it was a learning experience for SoCon individual champion Natalie Srinivasan who finished 95th and Carly Burkhardt who was 110th in the final standings.

The Lady Paladins lose one senior as Taylor Totland completed her college career at the finals.

Totland shot her best round of the tournament in the last round when she shot a 1-over par 73 to finish in a tie for 28th place.

All-SoCon selection Alice Chen will be joined by Jacqueline Bendrick and Reona Haria as seniors on the team next year.

If any of the Palmetto State teams has reason to be disappointed with their showing in the finals it could be South Carolina.

The Gamecocks began the final round in 6th place, inside the top eight that would advance to the match play finals.

Ainhoa Olarra was in contention for the individual championship, but lost her chance at the victory by going 5-over par on her last four holes.

An even par finish could have lifted the Gamecocks into the top-eight and kept Olarra as the runner-up.

“It was not our day really. We just needed to finish a little better,” said Gamecock coach Kalen Anderson. “The group played really solid all week for the most part, and they fought really hard. Ainhoa had a phenomenal week, and in general we did great. We just didn’t get the job done,” said the coach.

The Gamecocks return four of the five players who competed in the finals. Only Katelyn Dambaugh graduates from the team. The Goose Creek native will be missed as she leaves the program owning virtually every important school record.

“At the end of the day, Kate has carried our program for a long time. She has broken all our records, and I am so proud of the way she has carried herself,” said a grateful coach.

All the teams close to the cut line had to feel disappointed with the cancelation of the second round because of weather.

The lost 18 holes if played in decent weather could have made up for a lot of difficult shots in the terrible conditions of the first day.