It is too bad long range weather forecasts can’t be made three or four years in advance. If they could the last place the NCAA would have placed their golf championships is Sugar Grove, Illinois.

The men’s championship was scheduled to play the first round on Friday, but half way through the day the round was delayed and eventually postponed because of darkness.

Rain and bad weather was an issue at the NCAA Women’s Championship last week at the same course. (File photo)

This should not come as a complete surprise after last weeks NCAA Women’s championship at the same Rich Harvest Farms course. The first round was played in mid 40s temperatures with constant rain and high winds. The second round was washed out completely.

The weather got better late in the weekend and for the match play finals, but the same kind of weather pattern appears to be the occuring this week.

Clemson along with 14 other teams were left on the course when the horn sounded to end the days pay. The Tigers have between five and eight holes remaining to finish the opening round. They will have to play early on Saturday morning along with the other teams that did not finish.

The Tigers tee times on Friday were in the afternoon wave, so they will likely take a short break and be back on the course quickly.

Doc Redman has not finished his first round, but he is the top Tiger on the course. (File Photo)

Clemson is currently in last place among the 30 team field. The Tigers are now at 16-over par. The best Clemson score belongs to freshman Doc Redman who has seven holes to go. The ACC Freshman of the Year is 2-over par with 8 holes left to play.

Vanderbilt still has several holes to play, but the “doors have the lead at 8-under par. Auburn has completed their  round and is in the clubhouse at 6-under par.  The Tiger team includes former Easley standout Trace Crowe who shot a 1-over par round. 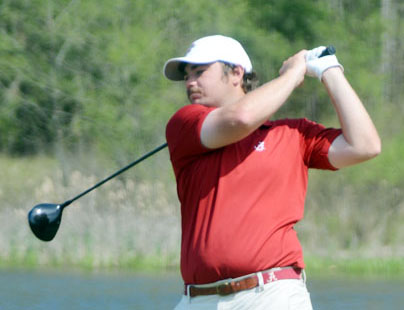 Jonathan Hardee from Riverside High School is tied for 7th place and helped his Alabama team to a tie for 9th. (File Photo)

Another golfer who grew up in the Upstate is tied for seventh place. Riverside grad Jonathan Hardee shot a 3-under par round of 69 to have a spot in the top-10. Hardee helped his Alabama team to finish the first day in a tie for ninth place.

The weather forecast for the area indicates Saturday should be playable, but the rest of the weekend calls for some thundershowers and rain.