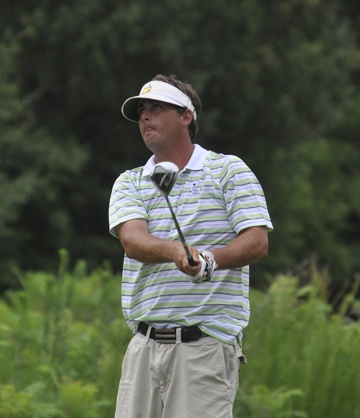 Defending champion Kevin Roberts has a share of the lead after the first round of the Spartanburg County Amateur. (File Photo)

The defending champion and a college golfer share the lead after the first round of the Coca-Cola Spartanburg County Amateur.

Kevin Roberts won the title last year and continued his fine play on the Woodfin Ridge course by shooting a 66 in the opening round.

Roberts shot a 4-under par 32 on the back nine to finish his first round at 6-under par.

The former Boiling Springs High School golfer carded a pair of eagles, three birdies and one bogey to card his 6-under par round.

University of Georgia golfer Trevor Phillips from Boiling Springs shot a 6-under par 66 to tie for the lead. (file photo)

While Roberts and Phillips had outstanding rounds they were not able to get much separation from the rest of the field.

Former champion Tyler Macoly and Andrew Jolley each posted a 5-under par 67 to trail the leaders by one shot.

Tripp Morrow is another shot back and Tripp McAllister finished at 3-under par 69 to keep the leaders in sight.

Twenty-two golfers finished at even par or better from the field of 127 golfers.

The tournament continues on Saturday and will finish on Sunday.