The Blade Board of Directors are ready for the 19th annual tournament at Thornblade Club.

When the top junior golfers in South Carolina tee off in The 19th annual Blade Junior at Thornblade Club most of the hard work of organizing one of the premier golf tournaments in the state has been completed.

In fact the first board meeting for the 20th Blade Junior will probably take place shortly after the trophies are presented to the winners.

An active and involved board is the reason that The Blade is The Blade.

“Any good organization can’t be successful without a good board and great volunteers,” said tournament chairman Rob Reeves. “It is important to have people you know you can count on and if we didn’t have those people we probably wouldn’t be here as long as we have,” said Reeves.

Volunteers check players in, marshall the course and handle scoring and shuttles. Before the event they help sell and promote the Junior-Am tournament and bring in sponsors. They seek out items for a silent auction all to help support the charitable mission the event has developed.

“We have had so many wonderful sponsors over the years. A-R Funding, Bradshaw Automotive and Freeland-Kaufman have been with us since the beginning. Julian Taylor with Titleist, Chick-Fil-A, Audrey Chapman and Pepsi of Greenville have really helped us a great deal. We have also had dozens of Junior-Am sponsors that come back every year,” said the chairman.

For most of the last 19 years The Blade Junior has not only been a great event for the players from all over South Carolina, but it has also become a significant fund raising event for local charities.

“The motto has been “Kids helping Kids” and we have been able to generate over a million dollars for charity,” Reeves said.

Kathryn Martin accepted a check for $30,000 from The Blade for the Kellie Rynn Academy

The tournament has supported a number of worthy charities and public service organizations since adding the fund raising element to the event. This year The Blade presented a check for $30,000 to the Kellie Rynn Academy.

Kathryn Martin lost her daughter Kellie Rynn due to negligence at an in-home childcare center. Martin and her husband Ashley have also led a campaign to change state laws to make childcare centers safer.

“The Blade has given us tremendous support,” said Martin. “Even to get our story out there has been just awesome. We are so excited and this has been an answer to a prayer,” she said.

In addition to providing the youngsters with a great venue to showcase their playing skills Reeves hopes the opportunity to give something back to the community from golf will become important for the juniors.

“We hope some of what we do rubs off on the golfers and they understand how they are helping while they are playing in a great event,” said Reeves.

This year the tournament continues to be the most popular event for junior golfers The Blade had to turn away over 100 golfers who wanted to play in the tournament. 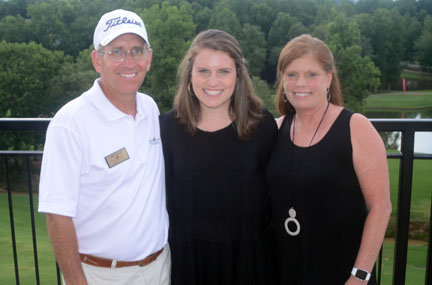 Each year The Blade presents a special award to a youngster who has overcome a major life challenge. This year The Spirit of Courage award was presented to Marion Reeves. Reeves overcame a major eating disorder and wrote a book to help inspire other youngsters to deal with the physical and emotional issue.

Each year the tournament board wrestles with the idea of finding a way to get more players into the tournament, but the field is at capacity for the 36 hole tournament.

“The golf course can only hold so many and we don’t want to eliminate some of the age groups because we know 8 and 9 year olds are waiting for their chance to play,” said Reeves.

The winners and many of the top players at The Blade have gone on to play college golf and some have advanced to professional tours, none of which would have been possible without the backbone of The Blade, the board.

“When the tournament starts we will have our board members and more than 50 volunteers, many of them are Thornblade members. We couldn’t do it without them and without the help from Thornblade,” said an appreciative Reeves.

More information about The Blade is available here

Interview with Kathryn Martin of the Kelli Rynn Academy